Flaky homemade all Butter Pie Crust is the best pie crust recipe you can make. Easy step by step instructions and a secret ingredient give perfect results!

The perfect flaky pie crust is equally dependent on the ingredients and the technique.

How to make butter pie crust:

There are two main steps in creating the perfect homemade pie crust: the mixing and the rolling. I'll break it down into two sections and we'll start with the mixing.

How to roll it:

Although pie crusts made with Crisco or lard are much easier to work with, nothing compares to the taste of a pie crust made only with butter.

Use this pie crust to make:

In addition to breakfast recipes like quiche and dinner recipes like Homemade Chicken Pot Pie, Empanadas, or Turkey Pot Pie, this delectable pie crust is best enjoyed in classics like these homemade pie recipes. 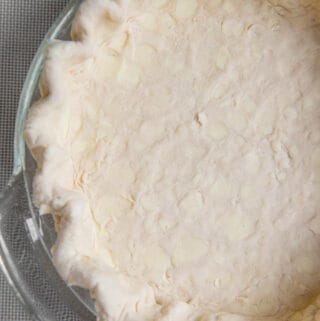 This post was originally written in June 2014 (one of my first recipes on the blog) and was updated in November of 2014 for your viewing pleasure.