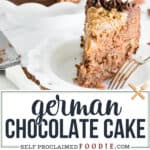 Everyone loves a good homemade cake. Some may consider it the best dessert recipe there is. This recipe has everything you want a German Chocolate Cake to have, and it will knock your socks off! If you love homemade cakes, you'll also love making my Lemon Cupcakes and my Carrot Cake with Cream Cheese Frosting. 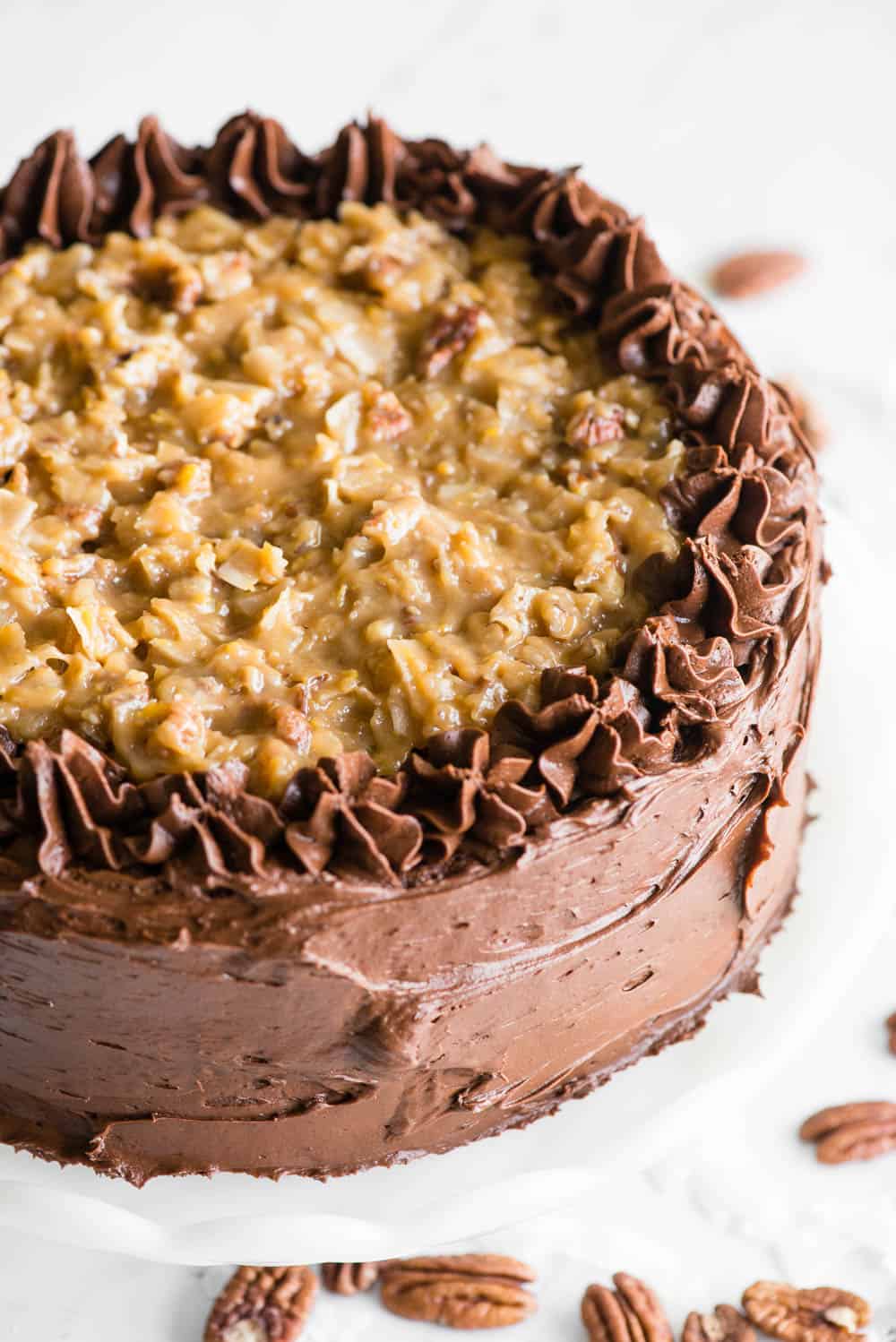 Pin it to your DESSERT RECIPE PIN BOARD to SAVE it for later!

I love homemade cake. I can always tell the difference between a homemade cake where everything was made from scratch. I grew up on boxed mixes and frosting from a tub, but once I realized how wonderful scratch baking was, I've never looked back.

I had some extra cake and asked my friends if they wanted any. I could not believe how many people said that German Chocolate was their absolute favorite! For many people, they said it's been their favorite since they were a kid!

What is different about German Chocolate Cake?

There are actually quite a few differences between a German Chocolate Cake and traditional chocolate cake.

First of all, the chocolate in the cake portion was intended to come from a sweet chocolate. This is different than milk, semi-sweet, or dark chocolate. If you see any recipes that call for chocolate chips or cocoa powder, know that you're not going to get a cake that tastes like authentic German Chocolate Cake.

In my opinion, milk chocolate is the closest you can get, unless you did what I did and use a combination of semi-sweet and blonde chocolate (which I think is the perfect combination for this recipe). Do you see how light brown the cake color is? Buttermilk is also a common ingredient of German Chocolate Cake.

Second, German Chocolate Cake is known for the custard-like topping that is full of pecans and coconut. I am a huge fan of coconut, and also love making coconut ice cream and coconut pudding.

Third, chocolate frosting is often seen on German Chocolate cake, however it is totally optional.

I've seen cakes that are smothered in the coconut pecan topping without any frosting, and for me, that's just too much. I also think a super creamy shortening frosting (like what you might get from a grocery store bakery) is a really bad choice for this cake. No.

The only way to go is with a dark, rich, fudge like chocolate frosting like the one I've used. It's the perfect compliment to the subtle chocolate flavor in the cake. 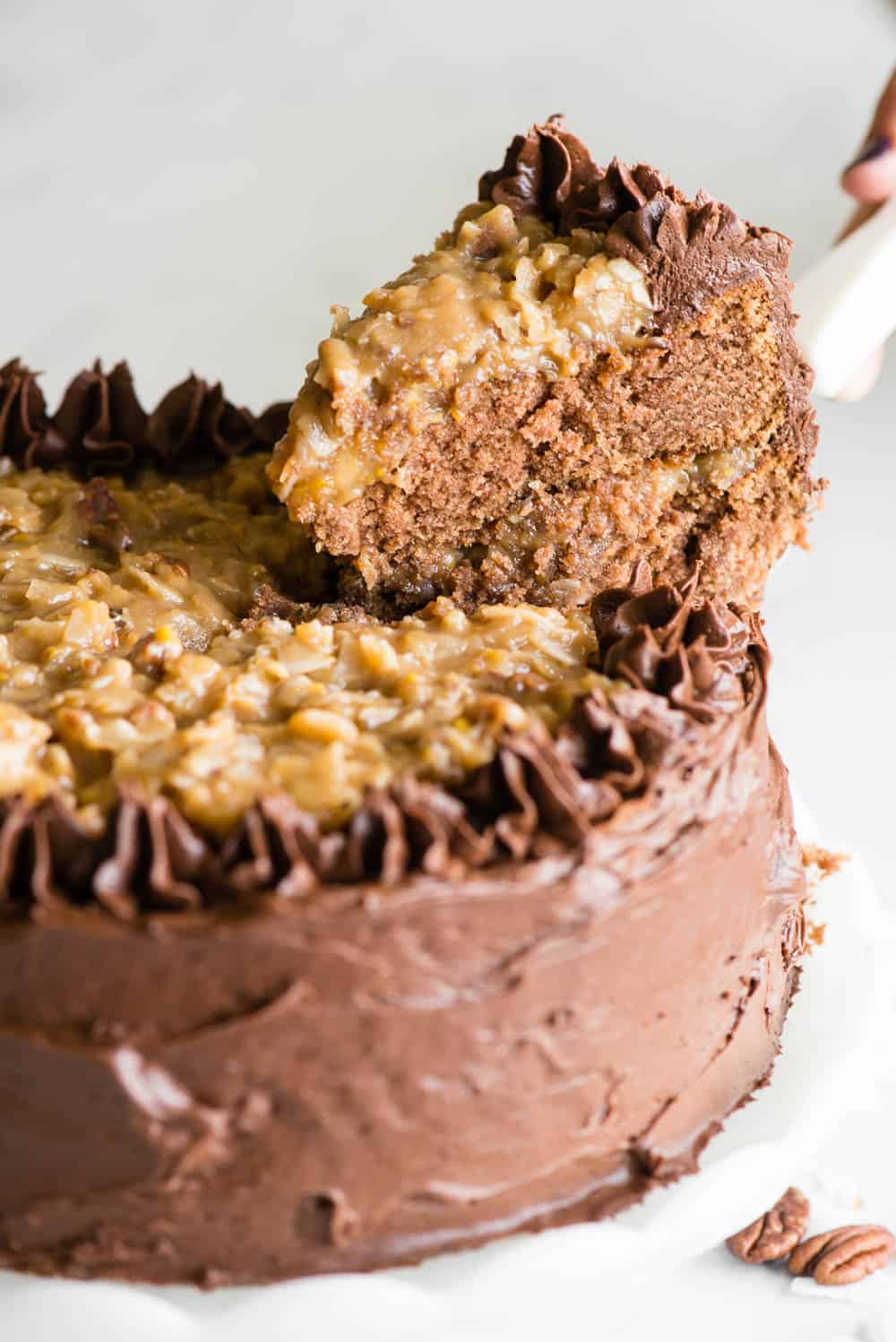 Why is it called German Chocolate Cake?

Think this cake originated in Germany, and that's why it's called German Chocolate Cake? Nope.

There are a lot of different ingredients in this recipe so I'll break it down by cake, frosting, and coconut pecan topping. I never said this recipe was going to be easy... but it is well worth it! 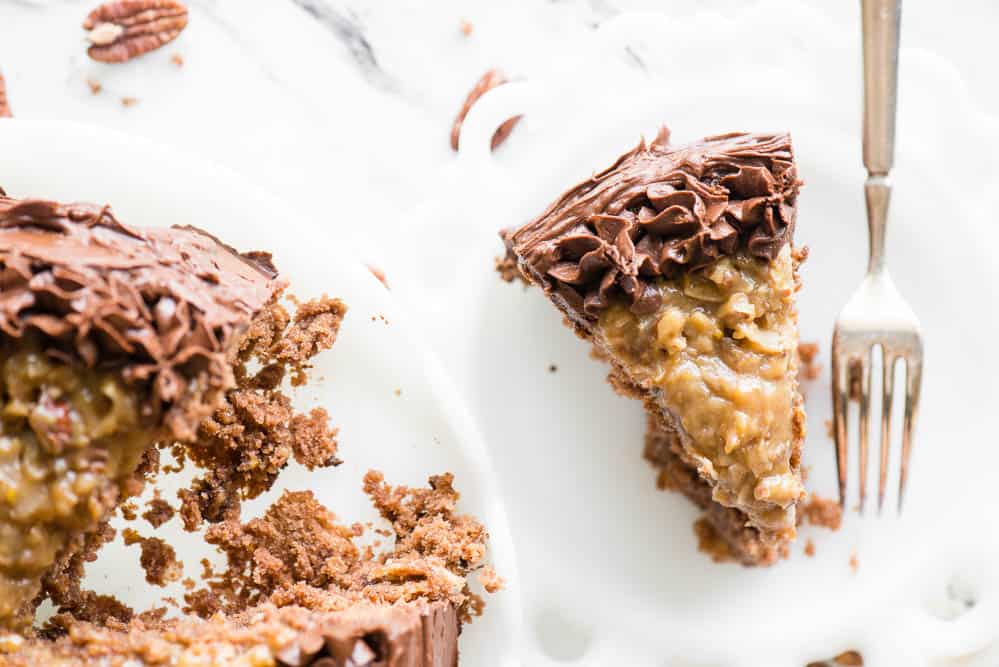 Again, I like a rich, dark, fudge like frosting for this cake. It may have been my favorite part! It really balances out the not-so-sweet cake with the super sweet chewy coconut pecan topping.

How to make German Chocolate Cake from scratch:

Okay, this is not what I'd consider a beginner recipe, however it really is a super easy cake to make. Full detailed recipe instructions are below, but I'll summarize here. 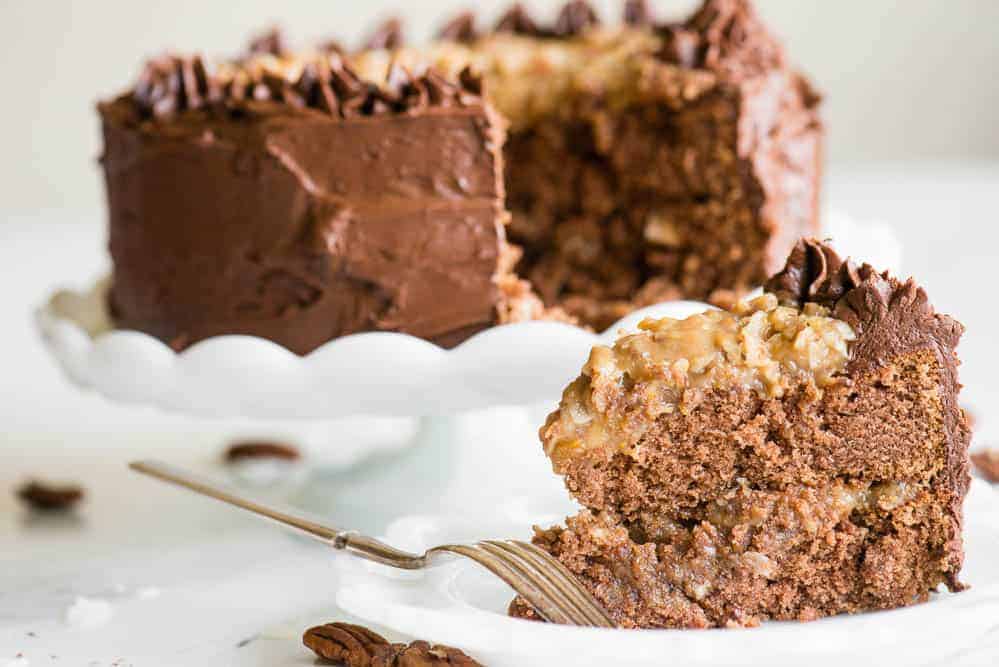 Does German Chocolate Cake need to be refrigerated?

This cake is most definitely best enjoyed right away, but I was surprised at how well it kept. I stored my cake in an air tight container at room temperature, and we were enjoying it for days.

If it makes you feel better to refrigerate the cake, you can certainly do so, but I kept it at room temperature and it was fine. 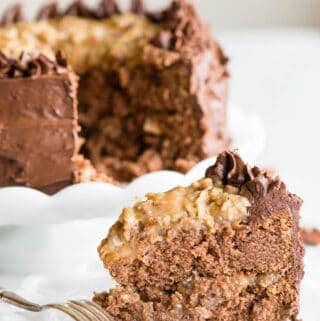 For the Chocolate Frosting:

To make the cakes:

To make the coconut topping:

To make the frosting:

To assemble the cake: