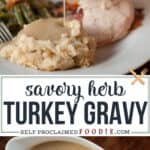 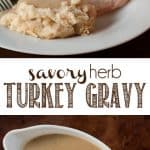 Savory Herb Turkey Gravy is the absolute best homemade turkey gravy from turkey drippings that you can serve with your Thanksgiving dinner.

This simple recipe starts by making a homemade turkey stock from the giblets which easily gets transformed into the best tasting gravy you can make.

Savory Herb Turkey Gravy is an absolute must for your Thanksgiving dinner table, especially if you're going through all of the time and effort  to roast a turkey.

There are a lot of turkey gravy recipes out there, but I promise you this is the best method. If you wanted to know how to make gravy from turkey drippings, I've got all the info you need to know right here.

Truth be told, turkey giblet gravy grossed me out when I was a kid. I used to watch my grandma cook the turkey neck and giblets and it nearly made me lose my appetite.

As an adult, I would pull the giblets out of the turkey and throw them straight into the garbage. But once I realized the amount of incredible flavor the giblets and turkey drippings add to the homemade turkey gravy - I was hooked.

There isn't anything better that you can smother your Thanksgiving turkey, mashed potatoes or cornbread dressing with!

When you buy a whole turkey, most often you will find a package inside the cavity of the bird that contains the neck and some of the vital organs.

These organs can include the gizzard which is a muscle that grinds up food before it enters the digestive system (sort of a pre-stomach), the heart, the liver, and the kidneys. Your first instinct might be to pull them out of the turkey and throw them in the trash. Please don't!

I'll go into more detail below, but what you want to do is sear these turkey parts to build flavor. When the neck and giblets hit a scorching hot pan, the surface instantly begins to caramelize, and this creates a deep, savory flavor once they simmer in the broth and drippings.

How to make the stock:

I recommend allowing this to simmer for at least an hour, but we all know that they longer, the better. The secret to an outstanding tasting turkey gravy is the broth.

How to make the gravy:

I can tell you this - this savory herb turkey gravy recipe is the best gravy you'll ever make! 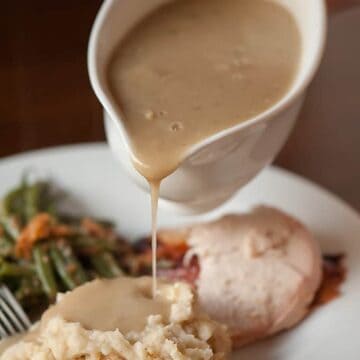 To make the turkey stock on the stove:

How to make the turkey stock in the Instant Pot:

To make the turkey gravy:

This recipe was originally created in November 2014 and was most recently updated in September 2019.