Homemade Sausage Stuffing is the very best Thanksgiving sausage dressing recipe you can make! Made with fresh bread and tons of flavor, it won't disappoint. It even tastes better when made the day before Thanksgiving, so do the prep work ahead of time!

I really should have called this recipe Sausage Dressing because that's what it is: a dressing side dish. I do not stuff my turkey with anything other than aromatics. Ever.

How to make sausage stuffing:

Detailed instructions are in the recipe card below, but here is a summary.

I always prepare this recipe the day before. Stuffing, or dressing rather, always tastes best when it has a day to sit and really absorb all the flavors before it gets cooked.

To prepare ahead of time, follow directions up to the point where the stuffing goes into the oven. Instead, cover and refrigerate. When ready to bake, simply extend covered cooking time by about 15 minutes to account for it being cold from the refrigerator. That's it!

That is the true question.

But, if your entire crew likes stuffing one way or another, you can simply control the mushiness or crispness simply by the size and type of pan.

If you like it crispy, use a large pan, use extra butter when greasing the sides, and cast iron will give a better outer crunch than glass or ceramic. Likewise, use a smaller deeper dish if you like it mushy. 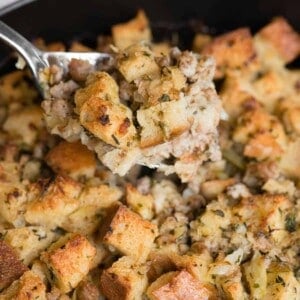 To Make the Sausage:

To Make the Stuffing:

This recipe was originally published in October 2019 and has been updated with helpful information as well as recipe tips. Don't worry - the recipe hasn't changed!