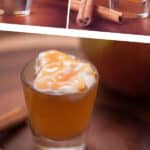 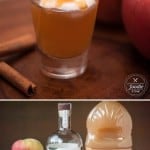 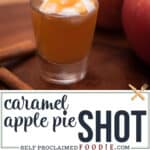 This caramel apple shot is the perfect fall cocktail! No mixing required. It's the perfect party boozy shot. This fall inspired shot tastes just like an apple pie drink!

This Apple Pie Drink is super easy to make and is so delicious, you'll be wishing this fall drink was served year round!

How do you make an apple pie alcoholic drink?

The best and easiest way is to use a high quality apple flavored vodka. I had a bottle of Wild Roots Apple & Cinnamon Infused Vodka and I absolutely love making cocktails with it. This delicious shot literally took me 53 seconds to make.

Honestly, you could just use this apple infused vodka and nothing else, but I am not one to be able to drink vodka unless it's diluted with some juice. I made this apple pie shot recipe with equal parts vodka and apple juice. My favorite kind of juice to use is Trader Joe's Honeycrisp cider. Stock up now... it's one of their seasonal products that isn't always in stock year round.

To add to the flavor of apple pie, I topped with apple flavored shot with whipped cream and caramel sauce. In hindsight, I wish I had named this cocktail recipe Caramel Apple Shot instead of Caramel Apple Pie Shot because there really isn't a pie element. I suppose serving it with a pie crust cookie would have done the trick!

Other ways to make a Caramel Apple Shot or Apple Pie Drink:

The main goal is to infuse the flavors of apple, cinnamon, and caramel into your cocktail. Fireball whiskey mixed with apple juice would be a great alternative to this vodka recipe. Fireball whiskey has a strong cinnamon flavor and the alcohol content is not as strong as many other whiskey brands so it's smoother and easier to drink.

You can also use straight vodka instead of the apple infused vodka, but again, the apple flavor won't be as strong.

Then you'll definitely want to make these tasty liquid concoctions: 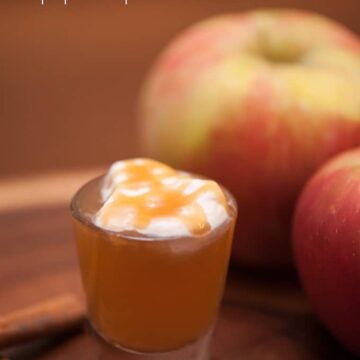 Calories: 96kcal | Carbohydrates: 5g | Fat: 1g | Cholesterol: 3mg | Sodium: 8mg | Sugar: 3g
SUBSCRIBE TO MY NEWSLETTERSign up to have my recipes emailed to you. Free!