This tasty Zuppa Toscana soup recipe is a copycat version of what you would find at The Olive Garden.

Zuppa Toscana might just be my new favorite soup. I mean, does it get much better than a creamy brothy soup, packed with flavor and texture? I think not. There's a question that get's asked more often than you might think: How do you make Zuppa Toscana soup from Olive Garden? Truth be told, I never eat at Olive Garden. But, I knew this soup existed so I did some research and created my own version that could definitely be considered a copycat recipe... only 1000x better.

I've made an Kale Soup with Italian Pork & White Beans that's a bit similar to this recipe, however the Zuppa Toscana has potatoes instead of beans and some heavy cream. Oh yes, and we can't forget the bacon. Zuppa Toscana is topped with crispy bacon. Are you starting to salivate yet?

What is the meaning of Zuppa?

From what I found, Zuppa specifically refers to a type of soup for which the main ingredients are vegetables common to the country. Considering this Zuppa Toscana soup has dark leafy green baby kale which is popular in the region, I suppose we can say it counts. If it's wrong to call this Olive Garden Zuppa Toscana recipe by that name, well, then I blame Olive Garden. There's only one thing you really need to know about this recipe, however. It is absolutely delicious.

Make this soup in the slow cooker or pressure cooker:

Although I made this particular batch of soup on the stove top, this recipe can easily be adapted to make in your crockpot or Instant Pot.  More often than not, I love making soup in my dutch oven on the cooktop because I get to be part of the entire process. I get to smell the smells and I get to hear all of the sizzles. Watching a recipe transform before my eyes brings me so much pleasure. But, I think using an electric pressure cooker to make something like this Zuppa Toscana would be quick and easy. Likewise, using your crockpot makes it so that you can prepare you meal in the morning and come home to a hot meal. All great options.

To make Zuppa Toscana in the Instant Pot or electric pressure cooker, make the following changes:

To make it in the Crockpot or slow cooker, make the following changes: 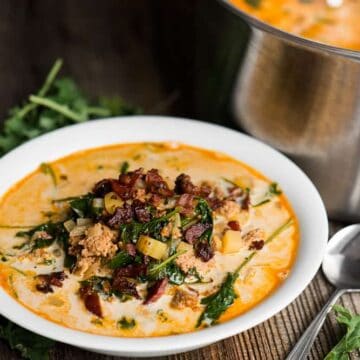