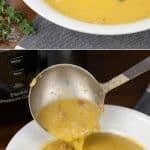 Making homemade split pea soup with ham is so easy when you use your Instant Pot. The ham bone gives this easy soup all the flavor you need. Serve it up with an amazing grilled cheese sandwich and you have all the taste and comfort you desire on a cold day! If you love homemade soup made with fresh ingredients, be sure to check out my Fresh Beet Soup and my hearty Winter Minestrone Soup.

Do you have an electric pressure cooker yet? They’re all the rage now. I got mine several years ago (I have two, actually) and was super scared and intimidated to try using it. First of all, the thought of high pressure scares me. I kept envisioning the lid blowing up during the cooking process. I consider pressure cooking very similar to canning – people have been doing it for years and it's a tried and true method of preparing food. Now I can't imagine not having an Instant Pot!

I’ve made split pea soup countless times on the stove top. Never has it been as delicious or as easy to prepare as when I make it in the pressure cooker. I have made it exactly the same way three times now using this recipe and it turns out perfectly.

How long does it take to make?

The total cooking time for this soup is 40 minutes under high pressure – 30 minutes to cook the frozen ham hocks and another 10 with the added peas and veggies. Less time if the ham you are using isn't frozen. Keep in mind that it still takes time for the cooker to come up to pressure, so factor that into your timing.

That being said, it takes hours for peas to soften on the stove the regular way, so the pressure cooker is definitely the way to go!

What seasonings and ingredients are used?

The only thing I season my split pea and ham soup with before serving is freshly ground pepper. The salt and incredible flavor come from the ham hocks and that is all the flavoring you really need when making homemade split pea soup.

How to make split pea soup in the Instant Pot:

Before you serve your healthy split pea soup, add the shredded pork back into it. Enjoy!

How long is it good for?

Homemade split pea soup is typically good for around 3-4 days in the refrigerator. Make sure to store your split pea soup in a covered container for optimal freshness. In fact, this split pea and ham soup is the perfect meal to have leftovers for taking to work the next day!

There are a couple of reasons why I prefer the pressure cooker as opposed to the cook top for this recipe.

This quick and easy homemade split pea soup recipe is incredibly delicious. I love making soups like this for a healthy family dinner that can be enjoyed any day of the week!

Leftover ham instead of ham hocks?

You bet. One of the best uses for a leftover ham is homemade split pea soup. In fact, I have half of a spiral cut ham in our freezer right now that I plan on turning into split pea soup.

The best kind of ham to use is bone-in. When you're making stock, soups and stews, the bones always add the most flavor. But, if your leftover ham is boneless, it will still work. 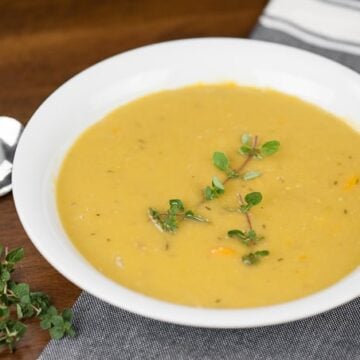 This post first appeared over at Real Housemoms where I was a contributor. This recipe originally appeared on my blog in September 2016 and has since been updated with more information and cooking tips for your reading pleasure!