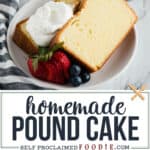 Homemade Pound Cake made from scratch with traditional ingredients of sugar, butter, eggs, and flour.

This isn't exactly the most traditional pound cake recipe because it has some cream cheese in it. Plus, I didn't weigh my main ingredients, I just counted my eggs and used a measuring cup for everything else.

But, it does taste exactly what I think pound cake should taste like and I will tell you it is a very moist pound cake recipe.

Why is it called pound cake?

For once, the name of a recipe actually makes sense! Sort of.

This recipe originates from Great Britain. A pound cake was given it's name because the traditional recipe was made with a pound of each of the four main ingredients: flour, butter, eggs, and sugar.

What I didn't understand was using the name "pound" when I thought Great Britain used the metric system, meaning this should be called a kilogram cake instead of a pound cake.

I actually had to look this little tidbit up so that it made sense in my brain...

Great Britain actually used the British Imperial System of measurement 1824 until the adoption of the metric system beginning in 1965. So, the pound cake must have started during that time period, right?

Not sure, exactly. It is also believed that the pound cake is of northern European origin that dates back to the early 1700s. Plus, there have been many documented variations of the recipe since. So... not exactly sure of anything except that it tastes really good!

Pound cakes are traditionally made in either a loaf pan or a Bundt mold.

Growing up, when convenient, frozen, pre-made, and processed foods were more popular than anything homemade, I only knew Sara Lee Pound Cake found in the freezer section.

We'd bring it home and not even wait to for it to thaw before we sliced it and topped it with fresh strawberries and whipped cream (from a can because we didn't make anything from scratch, of course).

Because I always ate pound cake in the shape of a loaf pan growing up, that is my preferred method to bake it from scratch now. But, either pan will work.

The difference between a sponge cake and a pound cake:

A pound cake is much more dense and moist than most other cake recipes out there, including a sponge cake.

Although the ingredients are very similar to other cake recipes, the specific quantities and equal portions of flour, butter, eggs, and sugar are what make a pound cake recipe so unique.

Other cake recipes, like a sponge cake, might involve different instructions to beat the egg whites separately, then fold them into the batter. This would result in a lighter, airier, fluffier cake than that of a pound cake.

Although very similar to my Brown Sugar Pound Cake, Classic Strawberry Shortcake and Angel Food Cake in that you want to top both with strawberries and whipped cream, pound cake has a different flavor and texture. 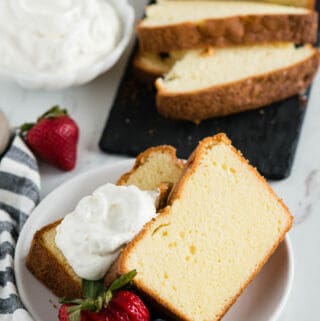