Is there anything better than a homemade cake? I say no... especially when it tastes like the tropics! Add some homemade cream cheese frosting and an ice cold glass of milk and I'll risk not being able to fit into my pants the next day.

If you're looking for a moist, perfectly sweet, and downright delicious cake recipe, look no further. Have you ever made a hummingbird cake? If not, there are a ton of recipes out there to choose from, but I can tell you that this recipe is not only relatively easy to make, but it is super tasty!

I'm no stranger to cooking with pineapple and coconut. Heck, I've made both banana upside down cake and pineapple upside down cake. I've combined the two flavors in a tropical granola.  Tropical Muffins are another great option too! It's no surprise that when these two flavors come together in a cake, it's going to taste good.

Why is it called a Hummingbird Cake?

I have no idea. But because I thought you might be wondering too, I did a little research.

One of my food hero's, Jamie Oliver, shared the information:

The giveaway to the Hummingbird cake’s birthplace, however, is in the key ingredients – bananas and pineapple. Hopefully you’re already thinking of the Caribbean, and it’s thought to have been invented in Jamaica, probably in the late ‘60s.

Originally, it was called the “Doctor bird cake”, a nickname for a Jamaican variety of hummingbird called the Red-billed Streamertail. The name came from the way the bird’s long beak probes flowers, like a doctor inspecting a patient. So what does that have to do with a pineapple and banana cake? Some say the cake was named after the bird because it was sweet enough to attract hummingbirds (who eat only nectar), while others say the yellow streaks of banana was reminiscent of the bird’s plumage. Either way, the Doctor bird was about to take flight.

If you have heard of a hummingbird cake, it's most likely because it was originally printed in Southern Living magazine and has become a favorite dessert of the south.

Reasons why this cake is so moist:

There are two reasons. 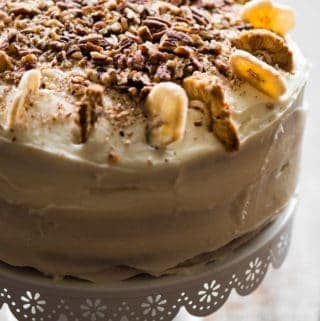 to make the cake:

to make the frosting: