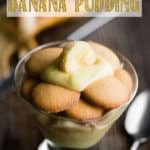 Banana pudding is a dessert recipe I've been enjoying since I was a kid. It really does not get much more easy or satisfying than combining pudding with cookies and sliced banana. What sets this banana pudding recipe apart is the homemade vanilla pudding. YUM!

This Classic Banana Pudding Recipe isn't rocket science. In fact, I've been debating for months whether I should even put it on my blog. Can you even call dumping three ingredients into a dish a recipe?

I mostly just wanted to share how I make banana pudding. I've seen countless recipes that use cool whip, sweetened condensed milk, and/or instant pudding mix. My classic easy Southern banana pudding recipe avoids all that. My homemade vanilla pudding is so darn delcious, it takes this banana pudding to the next level!

How to make banana pudding:

To make banana pudding as a casserole, simply layer all of these ingredients in a large casserole dish. I recommend you serve this easy banana pudding dessert right away. That way you will keep the cookies crisp, will prevent a skin from forming on the pudding, and you will prevent the bananas from browning.

You can, of course, prepare this Nilla Wafer banana pudding recipe ahead of time. If you do this, just be sure the top layer is completely Nilla Wafers. They will get soggy, but they will prevent your pudding and bananas from getting gross.

My favorite way, however, is to layer all of the ingredients in a small glass and enjoy an individual serving whenever the craving strikes! 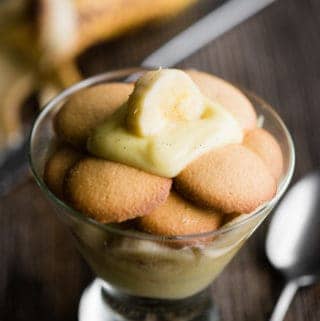 Recipe time is based on banana pudding recipe assembly. Does not include time it takes to make homemade vanilla pudding. 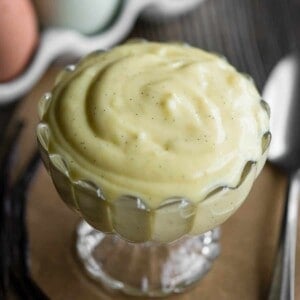 Makes about 4 cups. Serving size based on ½ cup.