Banana Cream Pie, with ripe bananas, homemade vanilla pudding, and a Nilla Wafer crust, is a true American classic when it comes to desserts.

Each bite is a flavor explosion full of different textures that will send you right back to your youth. This is the best homemade Banana Cream Pie recipe you will find!

Banana Cream Pie is one of those desserts that is good any time of year.

Any good pie starts with the crust. You could easily use an all butter pie crust for this pie, but nothing quite compliments bananas like Nilla wafers, right?

Then comes the filling. It would be easier to use a boxed pudding mix, but homemade pudding is worth the effort. The flavor is unbeatable!

Then there’s the topping, a luscious and slightly sweetened whipped cream to finish off this heavenly pie! You can go with a semi-homemade easy banana cream pie, or put in a little extra TLC for a banana cream pie recipe no one will forget!

Banana cream pie not only presents beautifully, but it’s one of those desserts that will put a huge smile on anyone’s face who enjoyed it in their youth. It may seem kind of complicated to make because there is a crust, filling, and topping after all. But, if you take your time with the pudding, it’s really an easy dessert to put together. 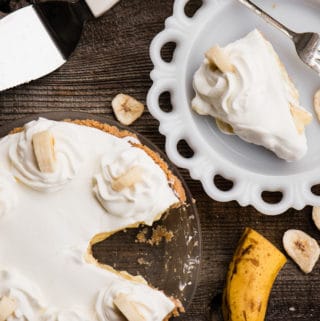 Recipe for making your own stabilized whipped cream: https://selfproclaimedfoodie.com/stabilized-whipped-cream

This recipe first appeared over at Real Housemoms where I was a contributor.