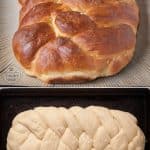 It's fantastic in french toast breakfast recipes too. Much like homemade dinner rolls, it's worth the time and effort!

There is something about making homemade bread that I find completely soothing. Much like pressure washing my driveway, it’s a time consuming but incredibly satisfying task. I tend to make homemade yeast bread, the kind that requires kneading and rising and punching and more rising, when I am most stressed in life and my to-do list shouldn’t allow anything close to making homemade bread.

The truth of the matter is, bread like this really doesn’t take much time from you actively working on it. It does require a lot of time, but most of that is when it rises. Plus, braiding six pieces of dough together is mighty satisfying.

I had never made Challah bread before and was relatively impressed with myself. A six-piece braid really isn’t all that complicated but you might be able to see that as I got more confident in the braiding process, the braid got a little tighter as I made my way down. I might just try doing this with my daughter’s hair if I can get another pair of hands in there to help.

How to pronounce Challah:

My brother-in-law is Jewish and he and my sister always make fun of me for the what I pronounce Challah. Rightfully so, because I pronounced it as I read it with the “cha”.

The C is silent, so it sounds more like Hal-lah with the accent on the first syllable.

Challah and Brioche are two very similar breads in taste. They are both sweet and soft which makes them both outstanding for French toast recipes.

How do you make Challah bread?

To start making this braided bread, you need to sprinkle your yeast in a small bowl of water and let it dissolve. Then in your mixer you will mix together the flour and salt before adding the honey, eggs, egg yolk, and oil. This should all combine together to form a shaggy dough. After adding the yeast mixture to the egg slurry, you will then mix until it is all combined.

The final baked loaf should come out deeply browned and simply delicious!

There’s nothing quite like the aroma of fresh baked bread, and challah is fantastic when shared around the dinner table, sliced up and served as toast with breakfast, or when made into a french toast casserole. You should definitely try making a loaf this season!

You'll have to try: 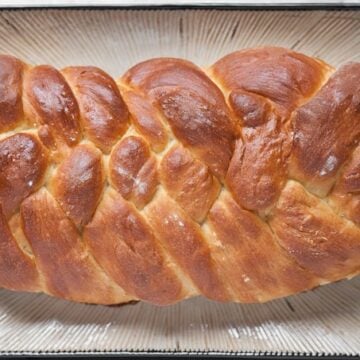 This post was originally created in December 2016 and has been updated with more fun facts and tidbits for your reading pleasure.

You may also want to try my Baked Challah French Toast - its a fantastic overnight breakfast casserole!