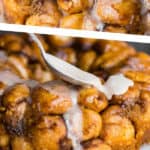 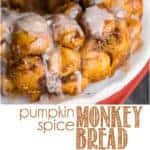 Who doesn't love some naughty cinnamon sugar monkey bread? There's no better way to enjoy a homemade monkey bread recipe than to infuse it with the fall flavors of pumpkin spice and everything nice! If you want to go into pumpkin spice sugar overload, go ahead and make some Pumpkin Spice Hot Chocolate too! 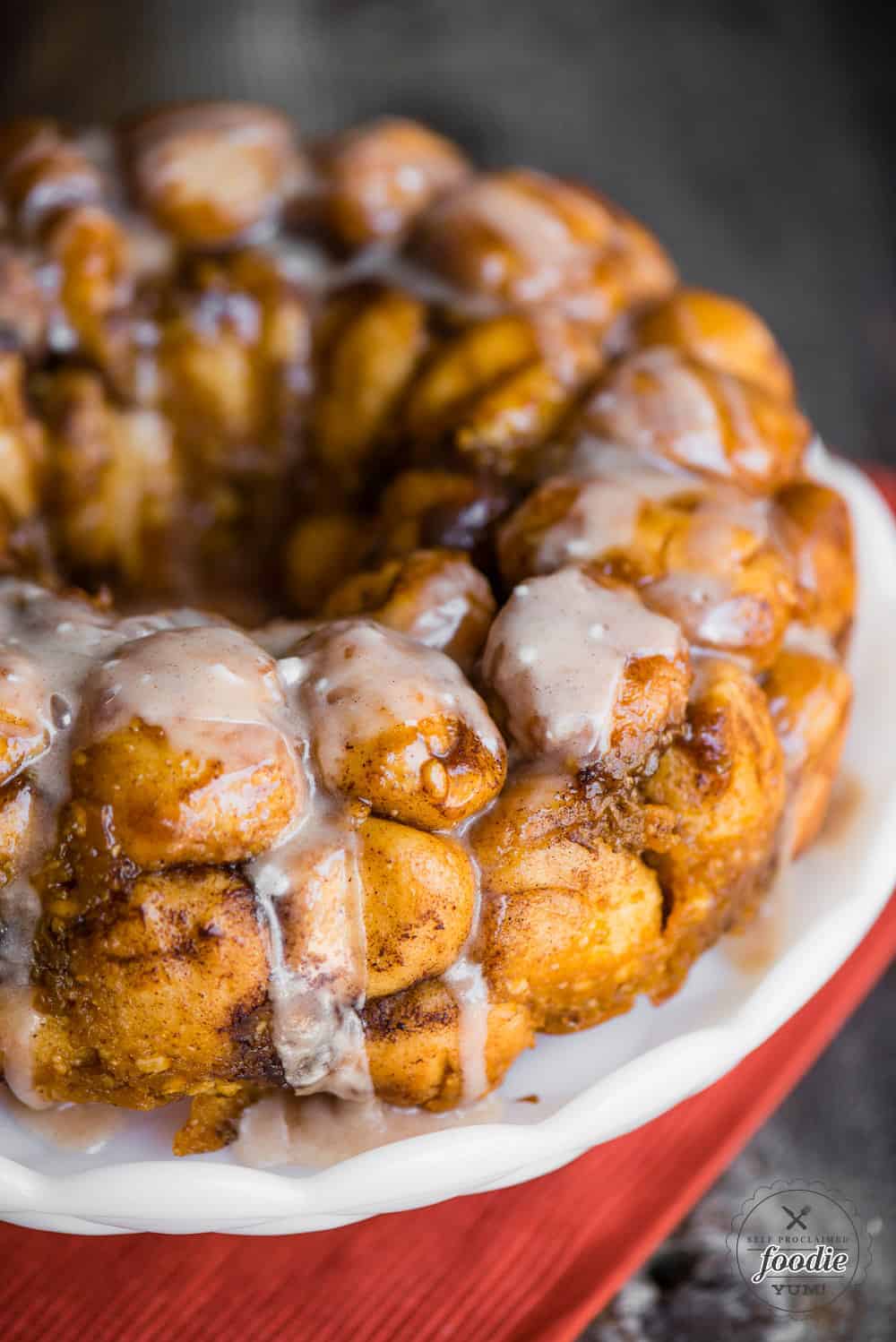 Pin it to your BREAKFAST BOARD to SAVE it for later!

Pumpkin Spice Monkey Bread is what fall mornings should be about. Best enjoyed with a hot cup of coffee and without thoughts of dieting or weightloss, this overnight homemade monkey bread definitely takes some time and work to make, but everyone will love it!  I made this pumpkin monkey bread on the same day that I made my Apple Fritter Monkey Bread, and it was a total toss up as to which version people liked best.

How do you make Pumpkin Monkey Bread?

For this monkey bread, I made the dough from scratch. This involves mixing and kneading the yeast dough, letting it rise, punching it down (the best part), and cutting it into 64 little dough balls.

From there, I dip each ball into melted butter and then roll it in a mixture of cinnamon and sugar. I will never claim that homemade monkey bread is good for you, but, oh, does it taste good!

To get the pumpkin flavor, I mix together some pumpkin puree. You can certainly use pumpkin from a can, but if you know how to roast squash or pumpkin, you can never go wrong with using fresh ingredients! I wanted to make pumpkin monkey bread with cream cheese, so I added that along with some brown sugar, vanilla, and cinnamon to the mixture and heated it until the cream cheese was mostly melted.

Here's where the overnight monkey bread portion comes in. Once your monkey bread is prepared, it needs a second rise. You can do this at warm room temperature for about an hour, or you can let your monkey bread sit in the refrigerator over night and then bake the next morning.

After it comes out of the oven, invert the monkey bread out of the bundt pan and onto a plate. Whip up some cinnamon glaze and drizzle it on top. 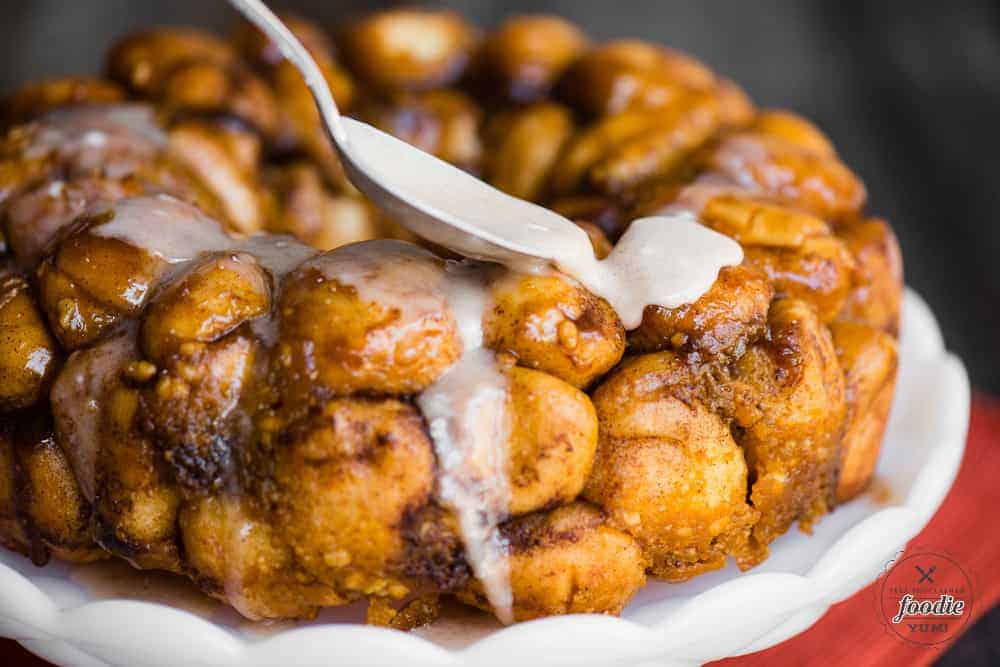 How do you know when Monkey Bread is done?

Whether you use homemade dough or make monkey bread using biscuits from a tube, you'll want to make sure it's properly done before you take it out of the oven. 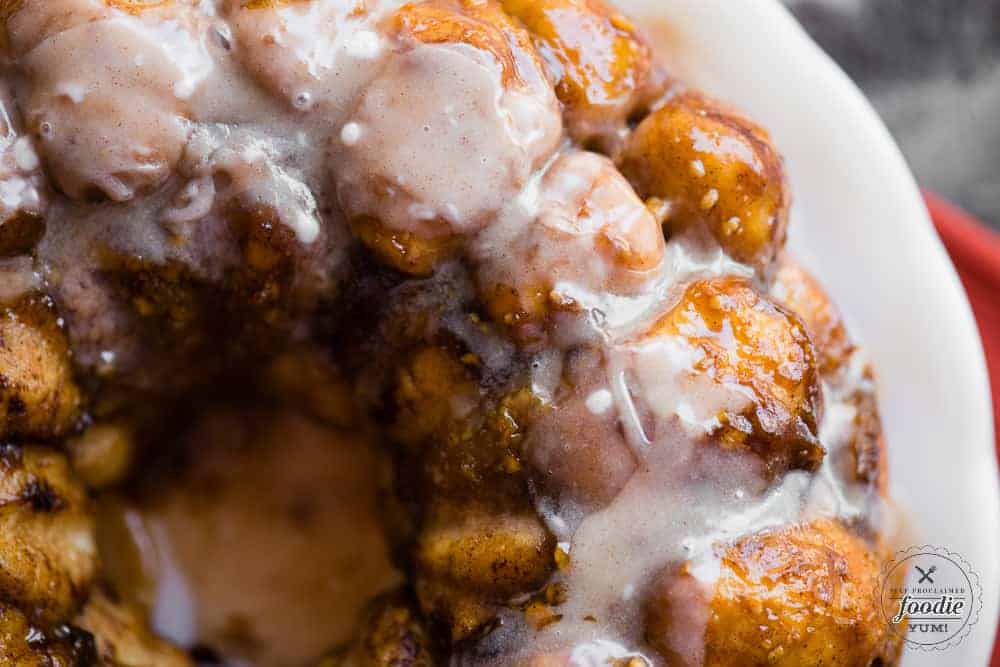 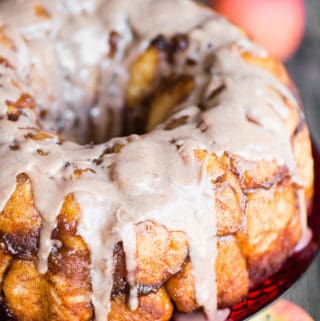 To prepare the pumpkin filling:

To make the dough:

To make the monkey bread: