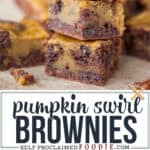 Pumpkin Swirl Brownies, homemade from scratch with chocolate chips, are moist, incredibly delicious, and possibly the best fall dessert I've ever had!

Pumpkin Swirl Brownies may be the best brownies I've ever made. I like pumpkin but I don't love it. I'm the kind of person who would scrape off half of the filling on a piece of pumpkin pie so I could properly enjoy the best ratio of crust to filling to whipped cream. These brownies, however, are incredibly moist and down right delicious. Is it the combination of chocolate and pumpkin? Is it because of the mini chocolate chips that create the perfect crunch against the super soft pumpkin layer? Is it the visually pleasing swirl?  I say YES.

One thing I was afraid of messing up was the swirl. You see, the chocolate batter is much thicker than the pumpkin batter. What I ended up doing was spreading half of the chocolate batter on the bottom, covering it with the pumpkin batter, and then squeezing the remaining chocolate batter out of a plastic bag with the corner snipped off to make rows. Then I took a knife and went through the rows to try for a swirl patter. Then I just swirled it around some more. It wasn't like a perfectly crafted latte with a gorgeous pattern on top, but it mixed it well. Whatever. Edited to add that I first made and posted these brownies two years ago but they were so delicious that the post deserved an update and a video (see below). My swirl technique as improved! The first time I made pumpkin swirl brownies, I roasted my own fresh pumpkin. When I recently re-made them for the video, I used organic canned pureed pumpkin (not pumpkin pie filling). I will always think the flavor and texture of homemade roasted pumpkin are far superior to canned pumpkin, but let's be honest - these are so good you can't really tell. These pumpkin swirl brownies always cook to perfection, and because I lined my baking stone with foil lined parchment, they lifted out easily for perfect cutting.

I had a friend at work who normally doesn't like pumpkin desserts try one of my pumpkin swirl brownies. Later that night his wife messaged me and asked when the recipe would go up on the blog. These are the kind of pumpkin brownies that could turn a non-pumpkin lover into a pumpkin lover.
They were so good, in fact, that I wish I hadn't brought half of them into work to share with my co-workers, despite the fact that I probably ate a third of what I brought in. No. These were so good that I would have worked out twice as hard and walked twice as far just to eat the entire pan myself. I will also add that these work great stored in the freezer. I just slide the entire batch into a large freezer bag and keep them on the top shelf away from little hands (i.e. my kids). Then, whenever I have a craving I grab one. The pumpkin layer is so soft that the entire brownie remains soft, even when frozen!

Not only are these Pumpkin Swirl Brownies fun to eat, they're fun to make! Especially the swirl part.

Watch me make them in the recipe video below! 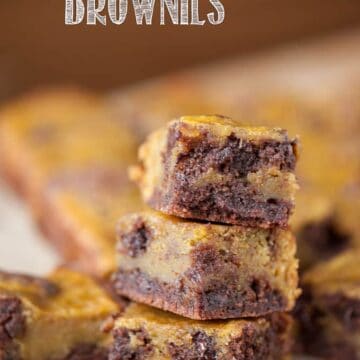