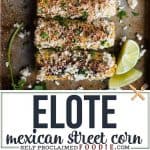 Elote, also known as Mexican Street Corn, is a mouthwatering recipe that combines grilled corn that's covered in sauce and topped with cheese and spices. This is, without a doubt, the best tasting corn on the cob I've ever had. If you want to take your corn to the next level, try this recipe!

What is Mexican street corn?

Elote Mexican street corn is corn on the cob that has been cooked over a grill, slathered with a creamy sauce, and topped with a chile seasoning mixture and cheese. It's often served on a stick for easy clean-finger eating.

Mexican street food is on-the-go cuisine most popular in Mexico City but has spanned the continent.

Elote is possibly the most popular version of Mexican street food and you'll find tons of recipes out there, but I can assure you that this recipe is outstanding.

Not gonna lie. At first, the thought of spreading mayo on corn sounded pretty awful. I'm not one to avoid mayonnaise either. I rather enjoy it.

But melted on a cob of corn? I wasn't so sure.

Let me tell you - it works. It works REALLY well. The sauce doesn't taste like it has mayo in it at all. Once slathered on that hot corn cob, it just melts into saucey goodness.

The spicy chile salt blend adds the perfect amount of flavor and kick and leaves a nice little burn on your lips after each bite.

The crumbly cheese is the perfect finish when eating Mexican corn.

Cooking tips when making this recipe:

How do you make Mexican street corn in a cup?

If you wanted to try this Mexican street corn recipe off the cob, it makes a great side dish for a dinner where you have a fork handy. You can still use fresh corn if you cut it right off the cob. Otherwise, frozen or drained canned corn works well too.

To make Mexican street corn in a cup, simply cook the corn kernals in a bit of butter over high heat in a skillet (cast iron works best), until it starts to char.

Then, instead of slathering the sauce on top of the corn cob, just stir it into the corn. Then, sprinkle with the seasonings and cilantro and you've got Mexican corn that can be served in a cup!

What do you serve with Elote?

Any kind of Hispanic or Latin American food would work.

I love hearing from my readers so be sure to leave me a comment below to let me know what you think of this recipe! 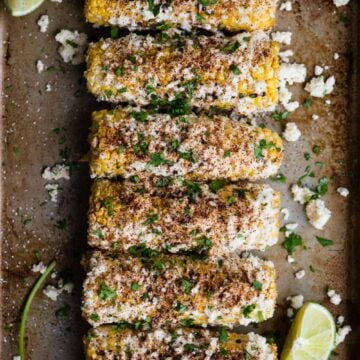 Serving size is one ear of corn.

Cooking tips when making this recipe: