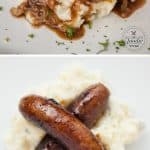 Bangers and Mash with Stout Onion Gravy is a traditional quick and easy dinner made from sausages, buttermilk mashed potatoes, and a savory gravy loaded with onions.

This recipe originated from the British Isles and can be made with any kind of sausage. The Irish Stout adds intense flavor to the sausage and the gravy. 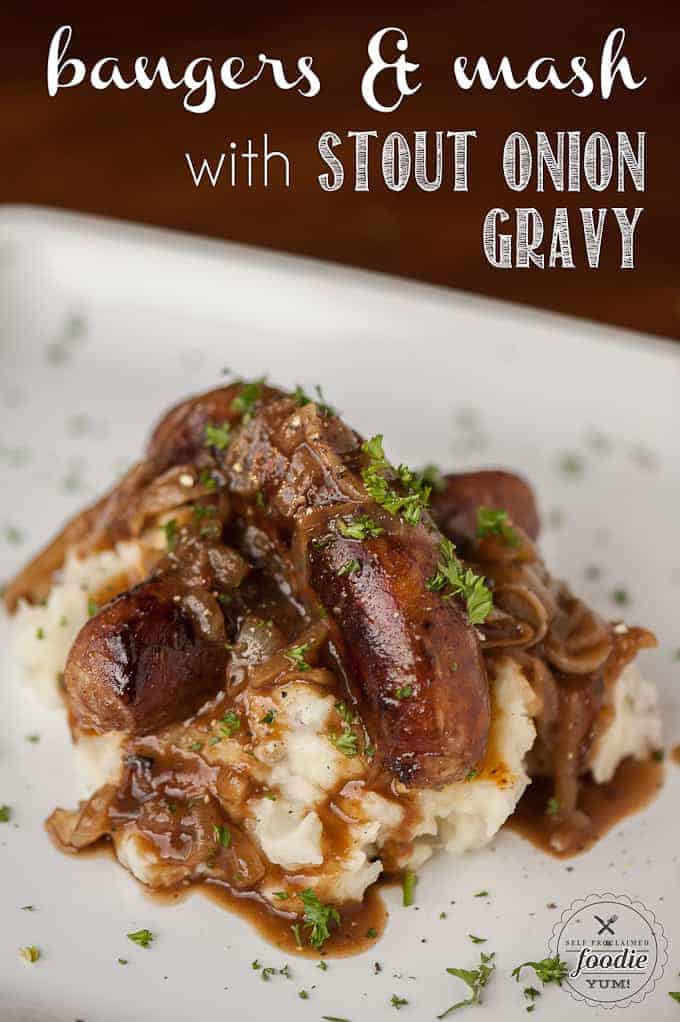 The stout onion gravy take this meal over the top and is what ties everything together. Guinness was my stout beer of choice and the onions really added to the flavor of the gravy.

You don't need to worry about the alcohol because it all gets cooked away, so this is a recipe that anyone can enjoy.

The sausages are crisp on the outside. The mashed potatoes are full of flavor and thick enough to hold the gravy. Make this recipe extra Irish by cooking up Colcannon.

I love making this recipe for St. Patrick's Day, but it makes an outstanding dinner any time of year.

This is a three part recipe: sausages, gravy, mashed potatoes. 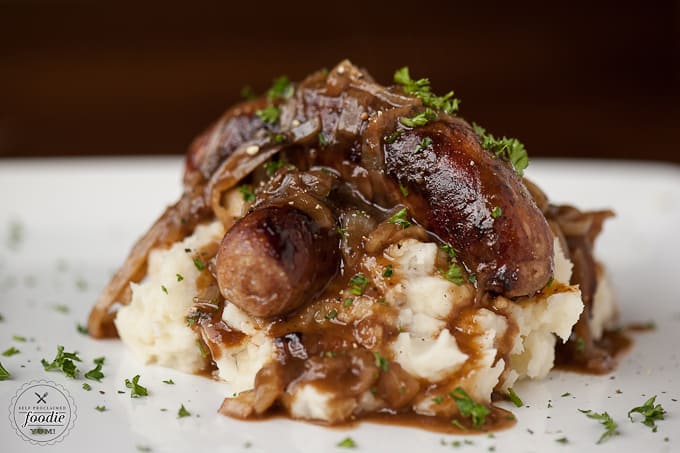 What does bangers and mash mean?

You might be wondering what vegetable goes well with bangers and mash? Peas. When in doubt, always throw on some peas. Especially if you have mashed potatoes and gravy for them to stick to.

Why is it called a banger?

I found an interesting article that discusses the origins of some popular foods.

I've known sausages have been referred to as bangers because they pop when they cook. Now, we all know that a good sausage or hot dog will split when it's cooked, but does it really pop?

The article states that "The sausage, one of the oldest types of processed food in history, can be traced back to ancient times. British pork sausages have been mass produced since the 19th century.

After the outbreak of World War I, food shortages led to a dramatic reduction of meat, of any sort, in sausages.

Instead, producers packed them out with scraps, cereal and water, which caused them to pop and hiss when cooked on shovels over open fires in the trenches of northern Europe — hence ‘bangers’."

Bangers and mash: English or Irish?

The answer is both.

It's typical "Pub Grub" you might find anywhere in the British Isles including Great Britain and Ireland. It's a relatively easy dinner to make either for a family or in large quantity if serving a crowd.

If you want to make this meal specifically Irish, use an Irish stout like Guinness to cook the sausage and gravy like I did for this recipe.

If you want to make this meal specifically British, just serve plain sausage with flavorless mashed potatoes. I kid! I kid! Well, sort of. 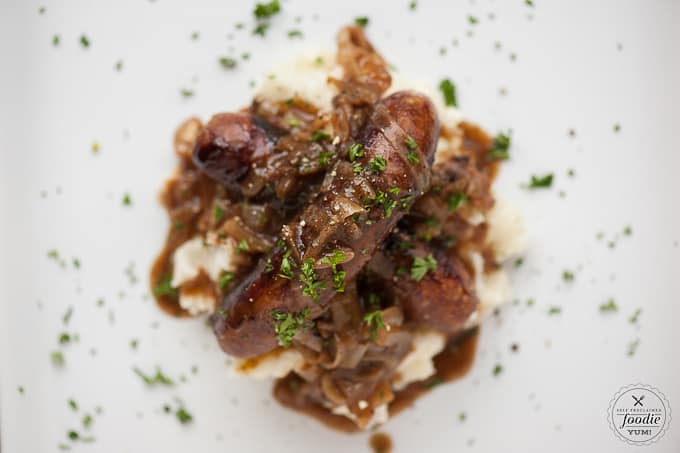 You wouldn't believe that I actually don't enjoy drinking stout beer based on the number of recipes I've made using stout beer, but it is outstanding in both savory and sweet recipes! 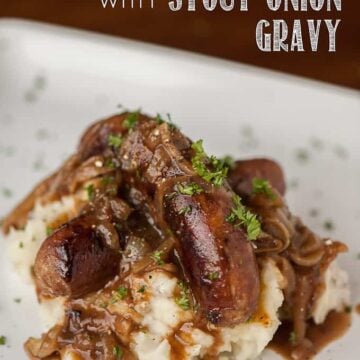 Bangers and Mash with Stout Onion Gravy is a traditional quick and easy dinner made from sausages, buttermilk mashed potatoes, and a savory gravy loaded with onions. This recipe originated from the British Isles and can be made with any kind of sausage. The Irish Stout adds intense flavor to the sausage and the gravy.
4.83 from 34 votes
Print Pin Rate SaveSaved!

This recipe was originally published in March 2015 and has been updated with information and cooking tips. Don't worry - I would never change the recipe!