The secret to cooking a perfect Surf and Turf dinner at home is in the timing. Instead of ordering this at a restaurant, find out how to make the absolute best version at home with the most flavorful steak and broiled lobster tail. Perfect for Valentine's Day, birthday dinners, or a New Year's Eve celebration!

For this mouthwatering dinner, I combined my reverse seared New York Strip Steaks with Broiled Lobster tails. I also highly recommend making Surf and Turf with Filet Mignon in place of the NY steaks.

✅ Why this recipe is so great:

Lobster tails, butter, lemons, and herbs. For the herbs, I like to make the compound butter to cook the lobster with fresh rosemary and thyme, but you can use other herbs including parsley, chives, basil, etc.

Ingredients needed to make the steak (aka turf):

Steaks and compound butter made with garlic and herbs. For this particular recipe, I used prime cut New York Strip Steaks.

🍽️ How to make Surf and Turf:

Detailed step by step instructions are listed in the recipe card below, but here is a summary. Again, the timing is everything with this recipe.

Lightly salt both sides of the steaks and expose to air in the refrigerator.

Use a food processor to mince the garlic and herbs. Add the softened butter and mix until smooth and creamy. This compound butter will be used for both the steaks and the lobster.

Prior to cooking, you must have the lobster tails ready to go. This can be done the morning of, or right before you cook the meal.

Coat steaks in compound butter, place in large cast iron skillet, insert a high quality meat thermometer, and bake just until the internal temperature reads 110°F. Note, this is much cooler than you will want to eat, but the will finish cooking later.

Remove the steaks from the oven, place on a cutting board, and let them rest for about ten minutes while the lobster cooks.

As soon as the steaks come out of the oven, turn on the broiler. Once the broiler is hot, place the lobster tails in the oven and broil until done. They will not take long to cook.

As soon as the lobsters go into the oven, set the pan the steaks cooked in on the stove and place over the highest heat. After the steaks have rested for about ten minutes and the butter in the pan is so hot that it is about to smoke, transfer the steaks to the hot pan and sear on each side. This should only take a couple minutes per side.

When done, transfer them to a cutting board and let them rest for a few minutes. The lobster should have just finished cooking.

Not much is needed to complete this meal, but I like to serve it with these favorites. 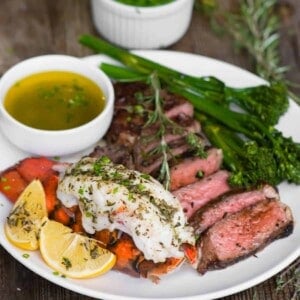 Cooking time is roughly 2 minutes per ounce, so 5-oz tails take about 10 minutes to cook. Anywhere from 3 to 10-ounce lobster tails are considered a good size for an individual portion.  Nutritional information is based on one whole steak, one whole lobster tail, and lots of butter.