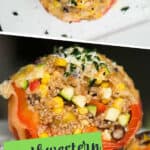 Southwestern Quinoa Stuffed Peppers are a flavorful and fantastic choice if you're searching for healthy vegetarian stuffed peppers without rice.

This easy and healthy dinner recipe also make a great make ahead lunch option for the work week. If meal planning helps keep you on track, you'll want to save this recipe!

Southwestern Quinoa Stuffed Peppers were a surprisingly easy and satisfying meal. I never been the kind of person to make stuffed peppers, let along quinoa stuffed peppers. In fact, I can only think of one other recipe I've made using quinoa. Note to self: make more quinoa recipes!

A couple weeks ago I made some Classic Stuffed Peppers, but I wanted to try another healthy stuffed pepper recipe, but this time I wanted to make stuffed peppers without rice. Turns out quinoa is a great alternative!

I knew these quinoa stuffed peppers needed to be packed full of flavor, but I still wanted to be able to call them healthy stuffed peppers. That's why I went with Southwestern flavors. Nothing like some black beans, corn, cheese and salsa to make anything taste good!

Reasons to cook with quinoa:

Love stuffed bell pepper recipes? Well, then you must try these favorites: 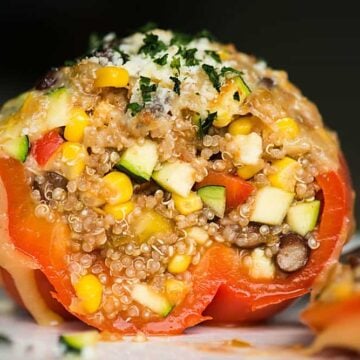 Southwestern Quinoa Stuffed Peppers are a flavorful and fantastic choice if you're searching for healthy vegetarian stuffed peppers without rice.

To make these quinoa stuffed peppers vegetarian, replace chicken broth with water or vegetable broth. To make them vegan, do the same and either omit the cheese or use a vegan cheese. Canned corn can be replaced with fresh corn, if in season.

This recipe was originally created in October 2017 and has been updated with more info for your viewing pleasure!