Homemade Chicken and Dumplings, with tender chicken, vegetables, and scratch made drop dumplings, is the kind of comfort food we crave.

This meal has the same great taste as a homemade chicken soup, but the fluffy dumplings make it a filling and savory meal. Chicken and Dumplings is an old fashioned favorite recipe.

Chicken and dumplings is one of those feel good comfort food meals. What do you crave when you're sick or it's cold outside? Chicken soup!

What do you crave when you want some delicious carbs? Soft biscuits, of course!

How about when any of those apply?  That's when homemade chicken and dumplings comes in. It's like the best of both worlds!

I, however, chose to make chicken and dumplings from scratch. There's only so many recipes that use canned biscuits that I can handle in a given time period!

As you'll see in the recipe below, I start by making a soup. All good soups start with onion, carrot, and celery.

My chicken and dumplings are no different. Next comes the broth. You can certainly use broth from a can or a box, but if you're lucky enough to have some homemade chicken broth on hand, it will make your recipe a thousand times better.

Same thing for the chicken. You can certainly buy pre-cooked chicken or use shredded meat from a rotisserie chicken that you picked up from the store.

I highly recommend, however, cooking a whole chicken using your Instant Pot and then using that shredded meat to make recipes like this along with chicken salad, enchiladas, etc. It is well worth the effort!

Finally comes the dumplings. They really only take a few minutes to put together. My dumplings call for a couple of eggs and they help give them a nice chew. Simply drop the dumplings in the simmering soup and 15-20 minutes later you have old fashioned homemade chicken and dumplings!

Can you freeze this recipe?

You bet. Most soups freeze exceptionally well, and this recipe is no different. I prefer to chill my soups in the refrigerator before transferring to an air tight container to freeze. I used to use gallon sized freezer bags, but I went ahead and bought quart sized reusable containers for my soup. Not only do they store the perfect sized portions, but they're easy to stack in my deep freezer.

How long can you keep chicken and dumplings in the fridge?

Just like any other recipe with cooked meat, I would advise eating the chicken and dumplings within the first 3-4 days. Will it last longer than that? Probably.

I always recommend the old sniff test. If you have to go back to smell once or twice because what you're smelling is questionable... you probably shouldn't eat it.

How long does it take for this recipe to cook in a slow cooker?

I hate to admit it, but I'm not a huge fan of cooking in the crockpot. I have a handful of slow cooker recipes on my site, but it's mostly because I know it is super convenient to prepare dinner in the morning and then come home to a home cooked meal.

I prefer to do almost all of my cooking on the stove top, my oven, or in my electric pressure cooker.

But, if you want to make my recipe in the slow cooker, I'll tell you how. 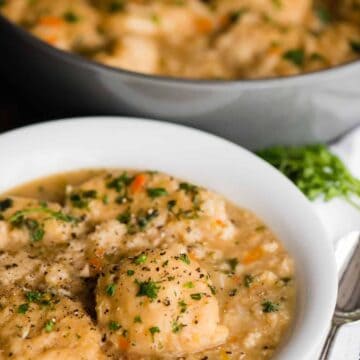