Zucchini boats stuffed with flavorful sausage and fresh veggies makes for a tasty low carb meal that you can serve for breakfast, lunch or dinner!

Hollowed out zucchini halves take the shape of zucchini boats. Cook up some tasty sausage with the remaining zucchini along with some other vegetables and the final dish is absolutely delicious. 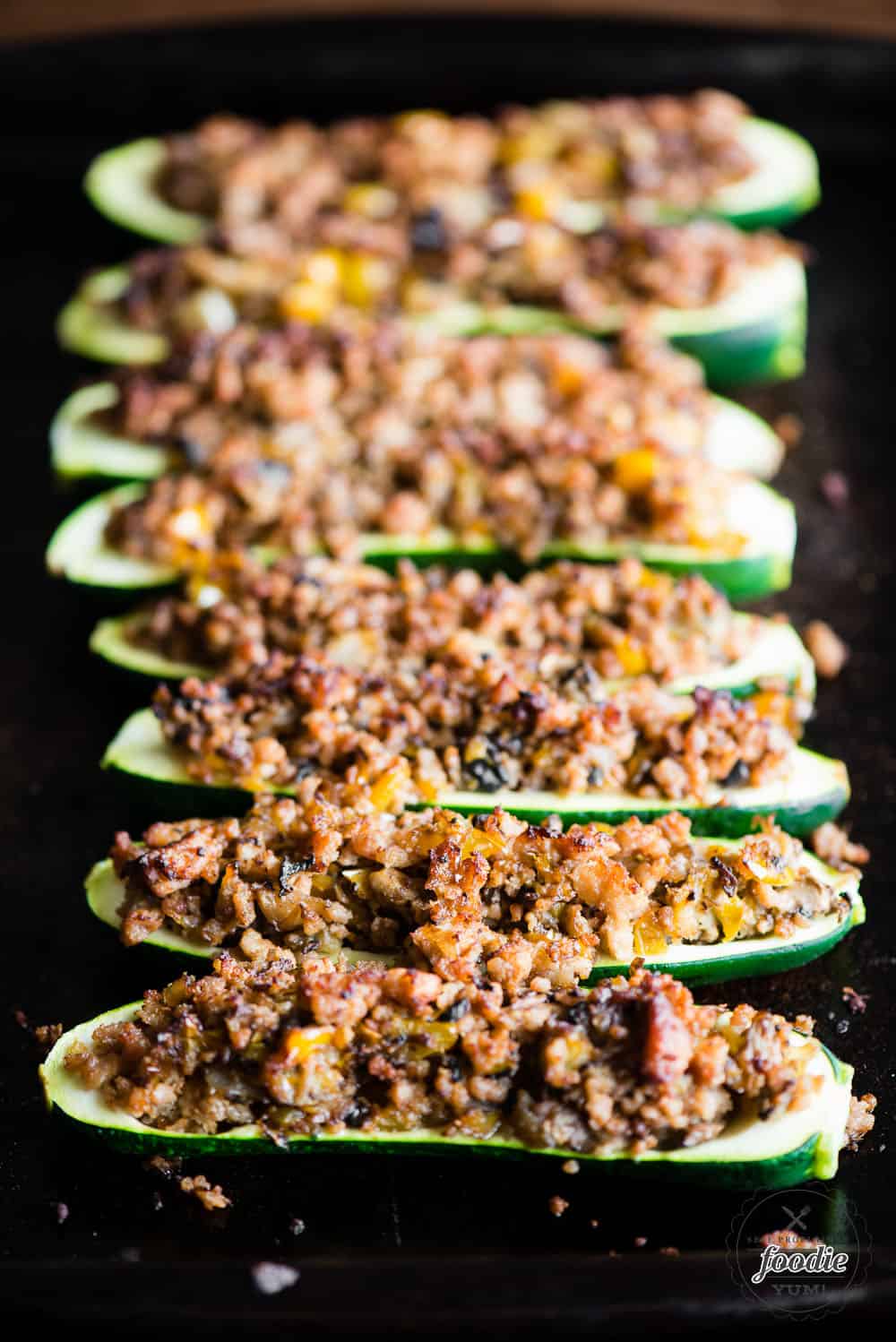 Sausage and Veggie Stuffed Zucchini Boats are such a tasty way to use up the abudant zucchini that grows in your garden as well as fuel your body with a complete meal of meat and veggies.

Much like my Classic Stuffed Peppers, these zucchini boats are an all-inclusive meal. Nothing else is needed to satisfy those hunger pains.

It's not often that I make a meal and don't serve it with some kind of starch or carbohydrate. That's just how I like to eat. But for whatever reason, I thought these sausage stuffed zucchini boats were so good all by themselves.

I ate them for lunch.

Then I ate the leftovers for dinner the next night.

Finally, I finished them off with some scrambled eggs on the third day. They were that good.

How to make zucchini boats: 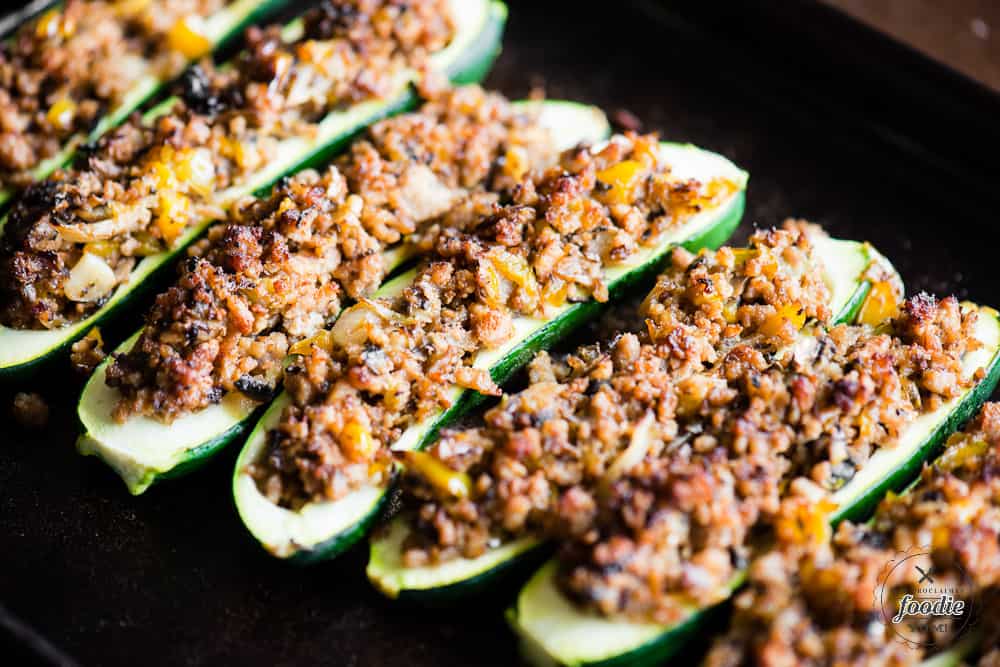 How long does it take to bake a stuffed zucchini?

I was able to cook my sausage and veggie stuffing in about 10 minutes. While the pork is cooking, you can save on prep time by cutting up the vegetables.

Once you stuff your zucchini boats, I found that it took about 20 minutes in a preheated oven to heat them completely through.

If you make your zucchini boats ahead of time and refrigerate, this final cook time might take longer because you'll be heating them up from a cold state.

Do you need to parboil zucchini when making stuffed zucchini?

When I make stuffed peppers, I always parbake my peppers by steaming them in the oven before stuffing them. I don't do that when making stuffed zucchini.

It might just be my personal preference, but I like my zucchinis to have a little bite. I want them to be firm enough after they bake in the oven that they won't fall apart.

For that reason, I don't parbake my zucchinis. 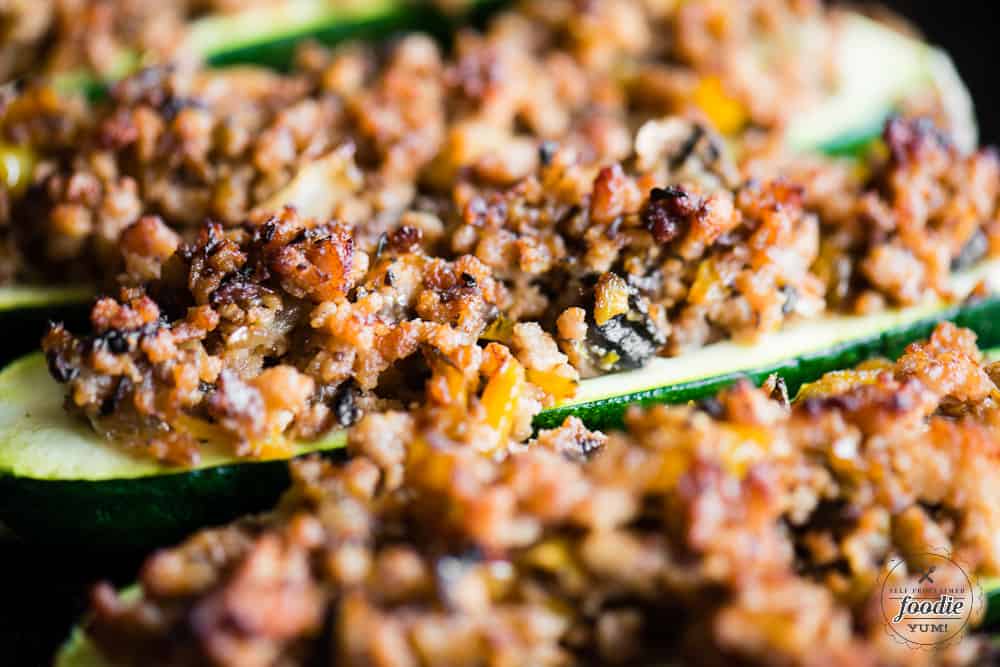 If you have a ton of extra zucchinis from the garden, you should make some chocolate zucchini bread for dessert! 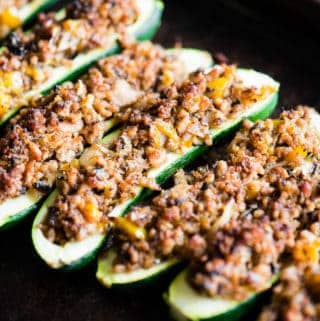 In a large saute pan, cook ground pork over medium high heat. When it's about halfway in between raw and dark and crumbly, add all of the veggies from the food processor. Stir well to combine and continue cooking until the meat is crumbly.