If your family loves Caesar Salad, making Homemade Caesar Dressing from scratch with anchovy paste, egg yolk, lemon and olive oil is incredibly easy! Pairing this dressing with a dark leafy green like kale, along with parmesan and toasted bread crumbs, make for an outstanding Kale Caesar Salad recipe!

This is such a great recipe compared to a traditional Caesar salad made with romaine lettuce. Why?

What is a Kale Caesar salad?

Simply put, it's the same as a traditional ceasar salad, except the crisp, crunchy romaine lettuce is swapped with fresh kale.

Overall, the flavor is remarkably similar because of the dressing, but the bitterness of the dark leafy kale really adds a whole new dimension to this easy salad recipe.

How to make Kale Caesar Salad:

How to store Kale Caesar Salad:

Unfortunately, once the dressing is added to the salad, it should be served immediately. If the kale Caesar salad is refrigerated with the dressing, both the kale and the toasted panko breadcrumbs will become soggy.

If you need to prepare this salad ahead of time, I recommend washing and drying the kale, making the dressing, toasting the bread crumbs, and shaving the parmesan ahead of time. Then, when you're ready to serve, toss all of the ingredients together.

Recipes that use fresh kale:

Nothing quite compares to the taste and texture of fresh kale. I love using it in a variety of recipes. If you're a fan of kale, you may want to try these favorites: 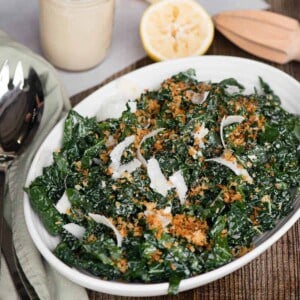 To make the dressing:

To toast the breadcrumbs:

To make the salad:

Recipe yields at least 1 cup of dressing. Nutritional information based on one serving size of 0.5 fluid ounces.