Crawfish Étouffée, full of tender seafood bites smothered in a spicy Cajun tomato based sauce and served over rice, is Southern comfort food at it's best!

This New Orleans classic can easily be made at home with this quick and easy recipe. I love to make a big batch and freeze it for when I crave spicy cajun food!

Crawfish Étouffée satisfies all of my cravings.

The flavor is intense and the combination of the succulent crawfish, or langostino, paired with the creamy tomato based sauce is heaven to my taste buds. My recipe has just the right amount of spice too.

This recipe is definitely a keeper and a repeat performer in our house.

Can you use shrimp instead?

Shrimp étouffée is made the exact same way as my crawfish étouffée recipe here, except you swap out the shrimp for crawfish.

What is an étouffée sauce?

Simply put, etouffee is a dish found in both Cajun and Creole cuisine, where shellfish cooked in a flavorful sauce is served by smothering rice.  As you might imagine, etouffee is popular in the New Orleans and surrounding areas.

The sauce generally starts with a light roux of flour and butter along with the "holy trinity" of Cajun vegetables which are onion, celery, and green pepper. You'll find this flavor combination in tons of Cajun dishes.

Sometimes tomatoes are added, which is exactly what I did for this recipe.

The word étouffée is influenced by the word étouffer which means to smother. Also, estuver in French translates to the word stew.

Etouffée is basically defined as a Cajun stew that smothers rice.

The more you know...

What is the difference between étouffée and gumbo and jambalaya?

Oh my god! They are all so similar! What on earth is the difference, anyway?

Let me try to break it down for you, as I am just now figuring out the subtle differences myself.

All three are considered Cajun main dishes. The all use that holy trinity of vegetables: onion, celery, and bell pepper. Here are the few details that I think makes them different:

Total disclosure: I had absolutely no idea how to answer this question so I started to do a little investigating.

According to Louisiana Travel, Creole cuisine uses tomatoes and proper Cajun food does not.

Cajun and Creole are two distinct cultures, and while over the years they continue to blend, there is still a vast distinction in Louisiana, and both have their own unique stories. A vastly simplified way to describe the two cuisines is to deem Creole cuisine as “city food” while Cajun cuisine is often referred to as “country food.”

Have you ever been to Louisiana? It's on my culinary wish list as far as destinations go. I would love to hear about your experiences and things you ate in the comments below! 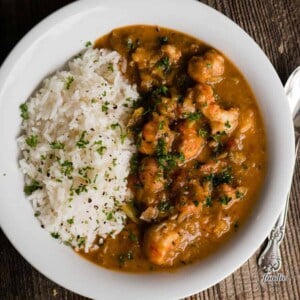 Crawfish Étouffée, full of tender seafood bites smothered in a spicy Cajun tomato based sauce and served over rice, is Southern comfort food at it's best! This New Orleans classic can easily be made at home with this quick and easy recipe. I love to make a big batch and freeze it for when I crave spicy cajun food!
5 from 10 votes
Print Pin Rate SaveSaved!