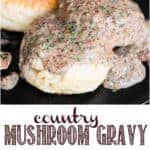 Country Mushroom Gravy is a great alternative to sausage gravy if you're making biscuits and gravy and can easily be made into a vegan or vegetarian recipe.

This homemade mushroom gravy is made from dehydrated mushrooms. If you're looking for a meat free alternative when making biscuits and gravy, this country mushroom gravy tastes and feels so much like it has sausage!

I wanted to make a Country Mushroom Gravy as a meat free alternative to sausage gravy. I thought about using fresh mushrooms, but I decided to try using the HUGE container of dehydrated mushrooms I got at Costco awhile back. I really wasn't sure how this mushroom gravy recipe would turn out, but I was so pleasantly surprised! 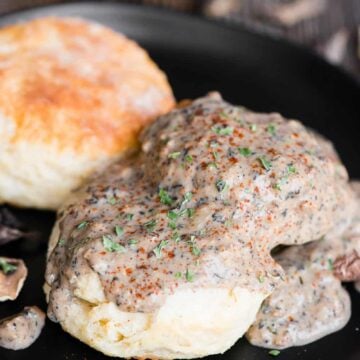