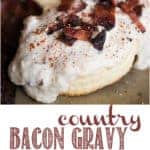 Country Bacon Gravy is a simple milk gravy recipe made with bacon grease.

If you love biscuits and gravy with traditional sausage gravy for breakfast, you'll love this bacon gravy!

Why bacon grease gravy is so good:

The basic formula to any gravy recipe is fat and flour combined and cooked to make a roux. Then liquid is added. The roux thickens the gravy.

The fat can be butter, oil, or in the case of this recipe, fat. One of my favorite fats to cook with is bacon grease. It has so much flavor.

The trick to a good roux is to cook it hot enough to develop a rich flavor and darker color, but not so hot that you burn it.

Typical gravy is made with either broth or milk. When making biscuits and gravy, you'll almost always be making a milk gravy. This bacon grease gravy recipe really is so incredibly fast and simple to make. You might be confused as to why I have salt in the recipe, especially considering how salty bacon typically is. For whatever reason, bacon grease really isn't that salty, so I felt the salt was necessary. 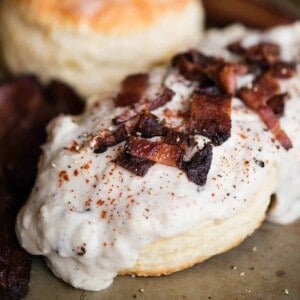 Country Bacon Gravy is a simple milk gravy recipe made with bacon grease. If you love biscuits and gravy for breakfast, you'll love this bacon gravy!
4.89 from 43 votes
Print Pin Rate SaveSaved!

1. In order for me to get ¼ cup bacon drippings, I had to cook an 18 ounce package. Since some people already have bacon drippings on hand, I didn't say that an 18 ounce package of bacon was necessary. Plus, depending on your bacon, you might need less to get that ¼ cup of drippings (my bacon was pretty lean). I do, however, recommend reserving 4 pieces of cooked bacon to chop and add to the top of the bacon gravy.
2. Love my recipe for Flaky Buttermilk Biscuits! Homemade is always best!!! https://selfproclaimedfoodie.com/flaky-buttermilk-biscuits/

This recipe was originally published in May 2018 and has been updated with helpful information, ingredient and process photos, as well as recipe tips. Don't worry - the recipe hasn't changed!