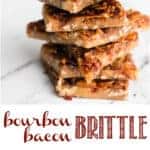 It's that time of year again where holiday entertaining is abound. Whether you're hosting your own gathering or are heading to a potluck holiday party, there isn't a single head that won't turn when they see this Bourbon Bacon Brittle!

The best part is that its a simple and easy recipe to make that uses ingredients that you most likely already have on hand! This recipe has it all - both crunchy and chewy texture and a ton of flavors ranging from super sweet to salty with the occasional bit of spice mixed in. This isn't just a boring pecan brittle recipe either. It's topped with bacon. Not just bacon, but candied bacon.

How to make Bourbon Bacon Brittle:

Did I mention how delicious those candied bacon pieces are? Must be that hardwood smoked goodness! Now's the hard part.  You have to wait for the brittle to set. The colder your house, the quicker it will set. You can either brake it into pieces or use a large sharp knife.

If you love homemade brittle, you'll definitely want to make my Hazelnut Brittle. 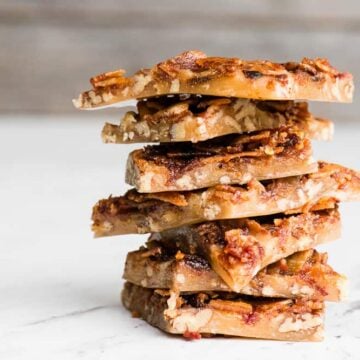 To make the Bacon:

To make the brittle: