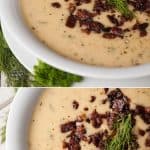 Pressure Cooker Leek Soup is the perfect meal for when the weather is cold and dark outside.

You will be especially satisfied with the crisp bacon on top of this warm, cozy soup!

When the weather is cold, all I want is soup. Not so much a brothy, healthy soup. No. I want a creamy, healthy, but kinda naughty, comforting soup. This one fits the bill. Healthy? Leek, onion, broth – check. Naughty? Potatoes, bacon, heavy cream – CHECK!

I never mix crisp bacon into a soup.

Do you know why? Because when you take perfectly crisp cooked bacon and soak it in hot liquid, not-so-good things happen. That wonderful chewy fat gets all white and floppy. Gross. No, the only time I ever put bacon IN my soup is when I plan to blend it up like I did with this soup. Then, the rest of that wonderful bacon gets sprinkled on top at the end. Don’t soak your bacon, friends.

How do you make potato leek soup in the Instant Pot?

You will start by cooking your bacon and then placing your bacon onto a paper towel covered plate when they’re done. Add the excess bacon oil in the pan to your pressure cooker and put it on sautee or browning. You will then add your leeks and onions. After stirring for about four minutes, you will add your potatoes and chicken broth and place the lid on top on high for five minutes.

After releasing the pressure in the pressure cooker, you will puree the leek soup in a blender until it is smooth. Then, put everything in the pot you cooked the bacon in and add the cream, herbs, salt, and pepper. Finally, serve your potato leek soup up with crisp bacon on top.

The herbs to use in your potato leek soup recipe are some fresh dill and fresh parsley. Together, these herbs will add just the right flavor to make this potato leek soup spectacular! Another thing to note is that you will need to add quite a bit of salt to the recipe, so be sure to make sure it is to taste.

How do you use leeks in soup?

It helps that the leeks are blended up so that you still get the flavor, but it isn’t so daunting-looking for kids! By cooking the leeks in the pressure cooker before you blend the up, you are ensuring that you get every ounce of good flavor it has to offer!

I have to tell you, every time I tell my kids what I’m making for dinner I get an astounding and whiny “Nooooooo, grossssss!”. Then they eat it. And they love it. This soup was one of those recipes. My daughter now asks for me to make potato leek soup all the time. 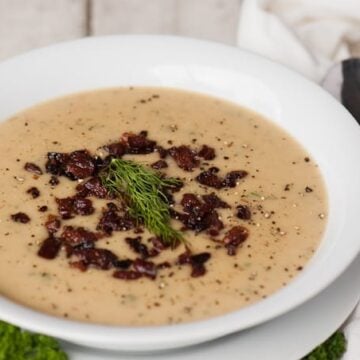 This post was originally created in December 2016 and has been updated with more fun facts and tidbits for your reading pleasure.