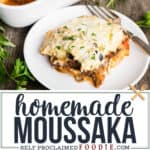 Moussaka is the best Greek comfort food. This Mediterranean inspired casserole is a combination of roasted eggplant, potatoes, Bechamel sauce, and ground beef.

This recipe has a lot of ingredients and many steps, but is worth the time and effort!

This recipe took me back to my Middle Eastern roots. I'm not gonna lie. This recipe was a bit complicated. It's not technically challenging, but there are a lot of layers that make this outstanding eggplant moussaka casserole so wonderfully delicious.

I've included a lot of process photos in the post as well as within the recipe, so hopefully you'll get a thorough preview of what's involved to make my version of Greek moussaka!

Moussaka is an eggplant and/or potato based casserole. You can certainly make vegetarian moussaka, but I chose to add meat.

As with many Mediterranean dishes, lamb is often the preferred meat of choice, but since I wasn't raised on lamb, I prefer to use ground beef.

You can serve this casserole hot or cold, but I much prefer to serve it warm.

Each layer offers a completely different taste, texture, and flavor profile, but somehow it all works well together.

The list of ingredients is rather long, so I'll break it down by layer:

Since this is a pretty extensive casserole recipe, you might as well make two and freeze one of them for a future dinner?

If you'd like to freeze this moussaka recipe, just prepare the entire dish up until the point where you put it in the oven. Wrap it tightly to prevent freezer burn and freeze.

To cook a previously prepared frozen moussaka, allow it to fully thaw before cooking.

It is one of my favorite Greek recipes, along with a good Tzatziki sauce and some homemade baklava. 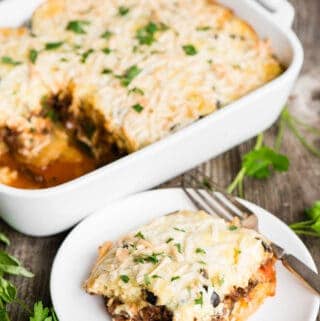 To make the meat sauce:

To make the Bechamel sauce:

To prepare the eggplant:

To prepare the potatoes: