We started a tradition of sending out Funny Family Holiday Cards each year.

It is a challenge to come up with a fun idea, but some how we make it happen. Eventually we will run out of ideas, but for now I will enjoy the fact that my kids used to hate the process and now look forward to it!

If you've never seen our family's holiday cards, allow me to give you a little history.  This is our 11th year doing funny holiday cards. Each year is different, but they are always a 5x7 folded card and have a funny photo on the front cover with our real family photo on the inside spread.

Our kids weren't thrilled about participating for the first couple of years, but with appropriate bribery they turned into willing participants.

Now, they get a kick out of not only taking the funny photos, but love seeing people's reactions when the cards are opened.

After the first card went out, we got so many great responses that we decided we would do something funny every year. Then the real challenge began - trying to come up with a new idea each year!

For this following year, we were lucky enough to have my stepson back in our family photo. You'll notice the lighting on his face was completely different from ours. That's because I took his picture outside in the open daylight on a summer day. Ours were taken months later in the garage with directional light. Oh well... at least we got him in this year's photo!

This was our most memorable (in my opinion) and my most favorite card. I love both photos equally, but for completely different reasons. 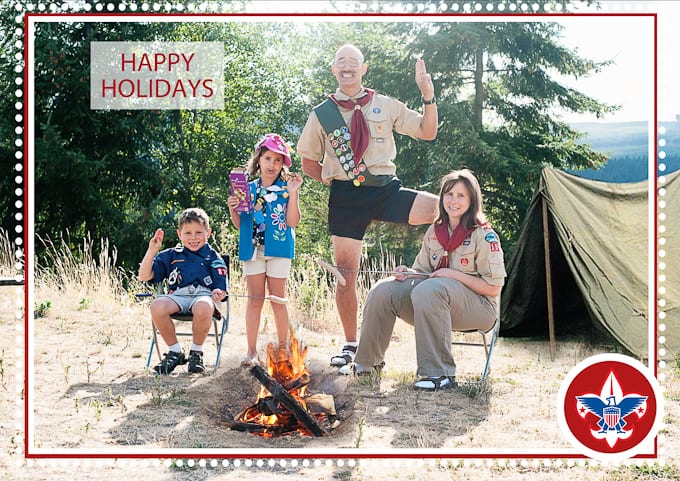 During this year, the cards went out two months early for a very special election edition!!! That means they were received before the 2016 presidential election vote.

I couldn't help myself. I just couldn't.

Don't I look good? After the way I've looked on the cover of the 2010-2015 cards, I figured I deserved a proper Melania-makeover. And simply because I couldn't resist, the back of the card had a very special tweet from the @realDonaldTrump, himself:

I really struggled to come up with an idea for this year's card. My husband has threatened in the past to scrap the whole thing if the photos weren't taken by September (he hates it when I procrastinate, and I ALWAYS procrastinate). Anyway, in true fashion I waited 'til the last minute but it all came together in the end.

How could we not do a 2020 themed card? By midyear, I knew our card had to encompass as much as I could fit in a 5x7" space. I started keeping an excel sheet as things happened.

I was able to squeeze 15 nods to 2020 in that first image. Can you spot them all? Before you scroll down, take a look again and see if you can count all 15.

I'll list them in what I think is the most to least obvious:

What will be our funny holiday card next year?!?

Leave me a comment with some ideas! If it's a good one, I'll see it but probably won't publish it to keep it private.