If you're a lover of s'mores, than these Five Minute Pudding S'mores are for you. Layer after layer of pure decadence and it is so easy to make!

I am a lover of pudding. Perhaps a story will further quantify how much I love the creamy deliciousness of a good pudding. When I was pregnant with my first born, I went through a phase that started about half way through my pregnancy and lasted until she was born. During this phase, I would end every single night with a very large serving of chocolate pudding covered in a thick layer of whipped cream which I enjoyed while soaking in a hot bath. I kid you not. Every. Single. Night. To think that I only gained 40 pounds during this pregnancy is nothing short of a miracle.

So, I put A LOT of photos in this post. It will probably take you three times longer to read the entire post than it will to actually make this dessert. I figured it would be fun to take you on a visual step by step journey. First, I took a glass and added a smashed up graham cracker.

Then, I added a few big spoonfuls of yummy chocolate pudding. Be sure to spread it around best you can because you don't want to leave any gaps that could otherwise be filled with more pudding!

Then I topped with a layer of homemade marshmallow creme. You can totally just buy the stuff in the jar at the store, but homemade is soooo so sooo much better.

This dessert keeps getting better and better. The next step is to add a layer of mini chocolate chips. When I make real s'mores, I prefer a good snap to my chocolate when I bite in. I like the sensation of the crunch against the gooey marshmallow. These are the things that bring me joy. I actually think it would look even cooler to have mixed the chocolate chips in with the marshmallow creme first. Oh well. Next time.

And because I don't want to work extra hard to get little bits of everything in each bite, I start all over again with another layer of graham cracker crumbs topped by a final layer of chocolate pudding.

The final step in this process is to toast up one of those jumbo marshmallows to perfection, then smash it down on top of that dessert. Holy cow - this was so good.

Don't you just want to shove that bite of chocolaty creamy gooey marshmallowy goodness right into your face? I did. 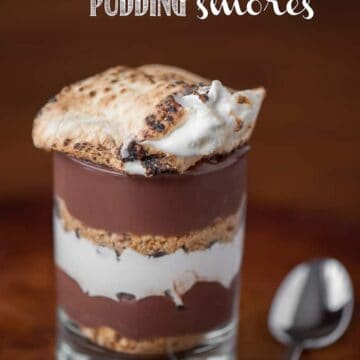 If you're a lover of s'mores, than these Five Minute Pudding S'mores are for you. Layer after layer of pure decadence and it is so easy to make!
5 from 7 votes
Print Pin Rate SaveSaved!
Course: Dessert
Cuisine: American
Prep Time: 5 minutes
Total Time: 5 minutes
Scale: 1 large serving
Recipe Created By: Krissy Allori