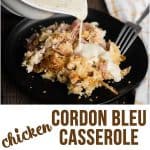 Chicken Cordon Bleu Casserole has all of the great flavor of homemade chicken cordon bleu, but it is much easier to make with rotisserie chicken.

Tender pieces of chicken, ham, and melted Swiss cheese are covered with a savory crumb topping and then smothered in a Dijon cream sauce. Chicken Cordon Bleu Casserole is the kind of dinner your entire family will love!

This is an easy casserole recipe:

This recipe is so easy, in fact, that it almost feels like a cheat. You see, the most difficult part of making Chicken Cordon Bleu is the fact that you have to pound the raw chicken breasts and roll them around ham and Swiss.  Not a lot of people enjoy handling raw chicken and the technique of stuffing the chicken breasts can be a bit challenging.

Next time you're grocery shopping, just pick up a precooked rotisserie chicken. Everyone knows they taste fantastic on their own, but when you combine them with a few other ingredients to make this easy casserole, your mouth  won't stop watering!

You could make the same kind of easy casserole for a traditional chicken parmesan recipe. Instead of using raw chicken, you could pick up a rotisserie chicken and have yourself an easy dinner casserole using similar ingredients!

What's in this Casserole?

The basic Chicken Cordon Bleu recipe consists of chicken wrapped around ham and Swiss cheese, then coated with some kind of bread crumb topping, and baked to perfection. The cream sauce is optional, but if you ask me I think it's a must. For whatever reasons, the saltiness of the ham and the meltiness of the Swiss cheese perfectly compliment the chicken. I guarantee that if you make Chicken Cordon Bleu Casserole for dinner, your entire family will love it and want you to add it to your regular rotation. 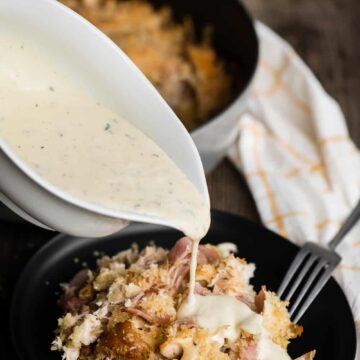 This recipe was first created for Centsless Meals where I was a contributor.