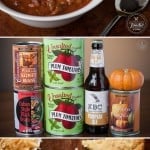 This recipe is the best fall comfort food.

There are a few good tricks, in my opinion to damn good chili. For this particular version, I wanted something fall inspired. I had heard of pumpkin chili before, and it just sounded weird to me.

If you’re doubtful like I was, have no fear – the end result does not taste like pumpkin pie. It tastes like fall. There’s really no other way to describe it other than spicy savory delicious fall chili.

What kind of beans are best when making pumpkin chili?

I normally stick with red and white kidney beans, but for this version I swapped out the red kidney beans for black beans. Not just any black beans, but Trader Joe’s Cuban Style Black Beans because they’re really tasty.

Pumpkin beer is the secret ingredient in this pumpkin chili.

I started putting beer in my chili quite some time ago. Instead of a traditional amber ale for this version of my pumpkin chili recipe, I used pumpkin ale. Pumpkin beer, or pumpkin ale, tastes like fall and not only tenderizes the ground beef, but it adds to the fall flavor of the pumpkin chili.

I added that entire can of pumpkin puree. You can also make pumpkin chili with fresh pumpkin that you roast and puree yourself. I also added a teaspoon of ceylon cinnamon to really bring out the fall flavor.

To make this mouthwatering pumpkin chili, you will brown the ground beef with the chopped onion and bell pepper until the meat is slightly browned and crumbly. Add some garlic and continue cooking for a bit longer.

Next you will add the pumpkin ale to the meat mixture and stir it with a wooden spoon to allow any browned bits at the bottom of the pan to release. You’ll see that the pumpkin beer not only adds great flavor, but it helps release all that delicious food that stuck to the bottom. Finally, you will transfer this mixture to the slow cooker.

Everything cooks on low in your slow cooker for six to ten hours. Pumpkin chili is the perfect meal to make on a busy weekday morning before rushing everyone off to work and school. This slow cooker dinner recipe is also perfect tailgating food because you can make it the night before, let it slow cook while you sleep, and then you reheat it before the game starts.

Besides the beer, my trick to making this chili really quite wonderful is to mash it up with a potato masher before serving. I don’t know about you, but there are only so many whole kidney beans I like to eat in one sitting. By mashing half of them up, you not only thicken up your chili, but all that wonderful fall flavor mixes in so much better. Enjoy! 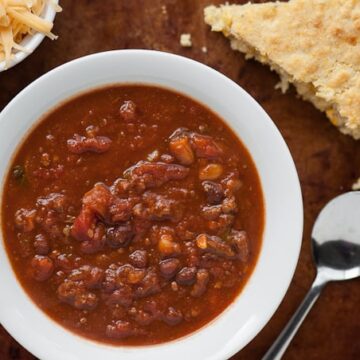 This post was originally created in October 2015 and has been updated with more fun facts and tidbits for your reading pleasure.