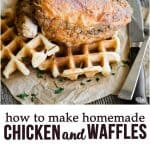 Chicken and Waffles, made with crispy buttermilk fried chicken and scratch made waffles, is a classic Southern breakfast recipe.

These are a perfect combination. Crispy spicy moist fried chicken on top of a crisp-on-the-outside soft-on-the-inside heavenly waffle, smothered in pure maple syrup. Whoever came up with this weird marriage is a hero in my book!

Chicken and Waffles is something that you typically order in a restaurant instead of make at home. Why? Because real Buttermilk Fried Chicken and homemade Belgian Waffles aren't super easy to make.

I wouldn't say either recipe is particularly that difficult, but they both take time and technique. Sometimes it's just easier to wait an hour in line on a Sunday morning on the other side of town.

But easier isn't always best. That's why you should make this recipe at home. You won't regret it.

Why is chicken and waffles a thing?

Chicken and waffles are a weird, yet delicious combination.

This recipe is an American classic. Soul food at it's finest.

If you've never had the pleasure of eating chicken and waffles, you may be a little baffled at this combination. Fried chicken is something we enjoy at dinner with mashed potatoes and gravy. It just doesn't get any better. And waffles usually don't get much more exciting than a fruit topping.

But, for whatever reason, the combination of hot Southern fried chicken that's crispy on the outside and moist on the inside and perfectly cooked waffles is pure heaven. Sweet meets savory and the result is pure satisfaction. If you've never tried them, you must.

Do you put syrup on them?

Yes. But if you're going to go to the effort of making this recipe, please oh please use real maple syrup. If the ingredients on your syrup are anything other than pure maple syrup, you'll break my heart.

If you're worried about what fried chicken tastes like with sweet maple syrup, just remind yourself that we pair sweet with meat all the time. BBQ sauce is sweet, right?

How do you make homemade chicken and waffles?

Obviously, there are two main components to this recipe: the chicken and the waffles.

Once you've made the chicken and waffles, just serve them up with warm syrup and satisfy those taste buds! 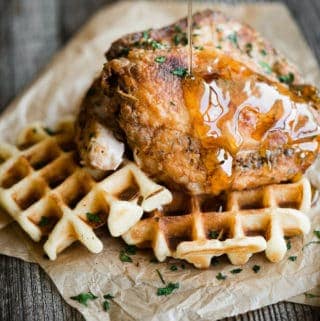 For the seasoned coating:

TO MAKE THE FRIED CHICKEN:

TO MAKE THE WAFFLES:

FOR THE FRIED CHICKEN: The oil should be at 350 degrees F to start, but when the chicken goes in it will drop to about 300 degrees. It should rise back to 305-310 degrees F  and the heat should continually be monitored and adjusted so that the temperature is held steady at these values. Internal temperature of cooked chicken should be about 165 degrees F. The white meat should take less time to cook than the dark meat. Since most of the buttermilk and a great amount of the oil is discarded, the nutritional information was based on consuming ¼ cup buttermilk and ½ cup cooking oil, divided amongst the 8 servings. Makes 4 extra large waffles (16 5" squares). Each serving gets ½ large waffle (2 squares each).