If you love seafood and decadent, then you'll love this quick and easy recipe. Take it to the next level by making this Shrimp Fettuccine Alfredo with your own homemade pasta!

Well, I used my own homemade pasta. You can certainly use dried store bought Fettuccine for this recipe. Absolutely no judgement from me. BUT, if you're willing to go above and beyond and want to break in grandma's pasta maker that you were given years ago and never used... well, now's the time!

Second, my homemade alfredo sauce is the best. THE BEST. I have no problem bragging about that recipe. The secret is to infuse the garlic in the butter first. Low and slow brings out all the flavor. Then, nothing but heavy cream and parmesan. No cream cheese in this version!

And finally, we have the shrimp. The big, tender, succulent shrimp. My process is basically to make a version of shrimp scampi and then combine it with my alfredo sauce and homemade pasta. The result? The best damn Shrimp Fettuccine Alfredo you'll ever enjoy!

How to make shrimp Alfredo pasta:

How do you make homemade Alfredo sauce?

There are a ton of versions of Alfredo sauce recipes out there. Let me explain why I think mine is so delicious.

Lots of people use cream cheese. I can't imagine that is an authentic Italian method. My version uses just a few simple ingredients - garlic, butter, heavy cream, and parmesan cheese. It is perfectly creamy and smooth and the flavor can't be beat.

Be sure to infuse the garlic in the butter for your alfredo sauce over low heat. You really want that garlic flavor to shine through, but garlic will burn in a high heat situation. Once that is done you'll add heavy cream and allow it to simmer. When you're ready to serve, you'll remove the sauce from the heat and add parmesan cheese and more heavy cream.

Cooking tip: if you use my favorite microplane fine grater and a real block of aged parmesan cheese, you'll create the most heavenly parmesan "snow" you've ever seen. Finely grated cheese likes this melts easily and is much better than thick pre-grated parmesan. Either will work, but the smaller the pieces, the better the melt!

I honestly don't add any.

I don't think salt is needed because the parmesan is plenty salty.

That infused garlic I keep talking about is all the spice I need.  There are tons of herbs - either dried or fresh - that you can add if you really want to add something. My recommendation would be basil and/or thyme. 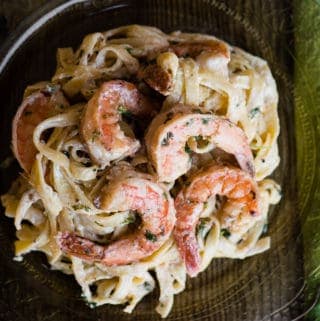